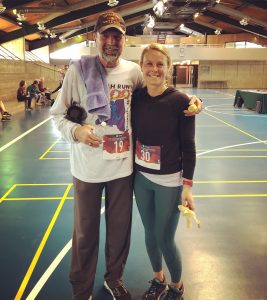 Pictured here with his daughter, (who is also an avid runner with a passion for helping mommas get their bodies back after having a baby) Bill just completed the Goose Creek 5K in April. While normally he would have done the 10K, and has participated in the Irish Classic on St. Patty’s Day as well as the Kentucky Derby Mini Marathon, Bill won’t be pushing his body that far. “5K’s are what I do at this stage of the game.”

Although his Achilles Tendon wasn’t completely torn, for Bill it has been a long road to receiving the proper treatment. He was initially treated by another doctor for plantar fasciitis with no results. After seeing Dr. Grossfeld in a publication, he reached out to her in the hopes that a PRP injection in the tendon would help. However, after exhausting every option, surgery was needed to repair the tendon.

Having already experienced a shoulder replacement in the past due to osteoarthritis, Bill has learned  throughout this process, “that not every surgeon is created equal. If you have a sports related injury, go to a sports doctor who understands the mechanics of what you want to do. I could have avoided surgery if I wanted to change my lifestyle, but I love being able to run and have been doing it for 40 years. Dr. Grossfeld understood that.”

After 1 month of weekly rehab sessions and walking with a brace, Bill was given the all clear to run in December and has been fortunate to have a quick healing process. He was awarded the first place medal for the 65 + age group during his first competitive 5K since the surgery. 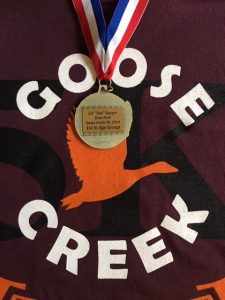 “At 72, I knew I had to go slow. I’ve worked at the gym and on the track and during the race I took it slow and easy, not pushing for time but concentrating on form.” Bill has been participating in the Goose Creek 5K for the last 25 years and is gearing up for another 5K in June. In the meantime, his wife is being treated by Dr. Grossfeld for her knees. Retired from the police and health departments, Bill is a Vietnam war era veteran who now volunteers his time at the local VA hospital.

“If you are committed to reaching a goal, age should not be a barrier. Thanks to Dr. Grossfeld, I’m back on the road again!”