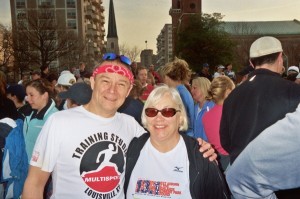 Don and Peggy Hoben have taken on the phenomenal task of completing a half marathon in all 50 states. Their journey began in 1999 and they are finishing their last race in Hawaii later this year. This ambitious project started after Don’s company offered employees the opportunity to receive free personal training at a local fitness studio (The Training Studio in Louisville, KY).
At the time, Don was 50-years-old and looking to lose weight. This opportunity to get in better shape and to lose weight was just what he needed and he signed on.

In 2000, Don and Peggy both began getting involved in the local racing scene in Louisville. They enjoyed competing in the Kentucky Derby Festival Mini Marathon, the Marine Corps marathon, and several others. After spending many hours training for these races, Don started to get tired focusing on the same old goals. While sitting inside the Ken Combs Running store on Shelbyville Rd. one day, Don and Peggy came up with a unique idea. They made the decision together to take their training to a whole new level by completing a half marathon in every single state.

At the time, a fellow employee at Don’s company had inspired them on this journey after she had completed seven half marathons on every continent. In the beginning, Don and Peggy’s strategy was more spontaneous and oftentimes races took place just two or three weeks apart. Since 2007, they have altered their strategy and have planned for many new adventures.

Not surprisingly, during some of these races, the weather has not been ideal. When asked about his favorite race, Don replies first with the races that were the most challenging and unforgettable. For example, Don and Peggy competed in the Chicago half marathon, or what they like to call, “The Hurricane.” They spent the entire 13.1 miles running in nonstop rain. The race in Utah left Don and Peggy wishing for warmer clothing, while the hills in the San Francisco half marathon proved to be an unforgettable challenge.

Despite encountering some rough conditions, they have also experienced many new adventures and sights while traveling to races across the country. When possible, along with the races, they enjoy spending time searching out Presidential graves and libraries, National Parks and capitals in the states that they visit. Most recently they completed a race in Maine and are now looking forward 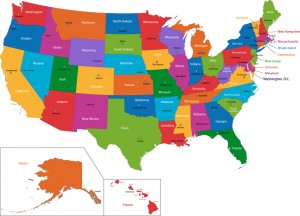 to their last two – one in Vermont and the grand finale in Hawaii.

Because Peggy walks these races, while Don executes a combination of running and walking, the two have different training schedules. Their paces leave them separated for most of the race. Don used to go back and finish the race with Peggy, but now he patiently waits at the finish line for her return.

This 50 half marathon goal has not left Don and Peggy without injury. The two have both faced meniscus tears, and minor knee injuries. Don shares his injury prevention plans which involve taking it easy, despite completing four to six half marathons a year. He explains, “It’s more about finishing the race, rather than trying to get a new PR every time.”  However, the 65-year-old hopes to break his goal of two hours for one of his final races.

When Don talks about running, it is clear that his involvement is not only a passion, but it’s a way of life. The energy he gets after completing his training every day allows him to feel invigorated and motivated to continue the next day. He enjoys the way running gives him to ability to stress less about calories and to enjoy life more fully. Laughing, Don explains, “Sometimes I think I run more to eat than eat to run.” His preparation the night before races usually includes carbo loading and lean proteins. Any other day, he enjoys cookies and candy in moderation just like the rest of us.

Running beside Peggy has been a huge motivation to continue on, while Louisville sports medicine physician Dr. Stacie Grossfeld has also shared a unique interest in Don and Peggy’s physical pursuits. Referring to Don as “one of my runners,” Dr. Grossfeld encourages and cares for his active lifestyle. She is there to help Don and Peggy realize their sports goals in any way possible. And this has included some treatments for the occasional k 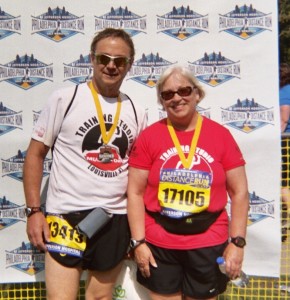 nee problems that tend to slow down many athletes from time to time.

The Hoben’s are well on their way to completing their extraordinary goal of finishing 50 half marathons in 50 states. After they spend 13 days in Hawaii for the race on Kauai, they plan to relax and revel in their accomplishments for a week over on the big island. Peggy shares with Don that she is interested in completing other races in previous states, so the Hoben’s may continue their love for racing even after the big finale.