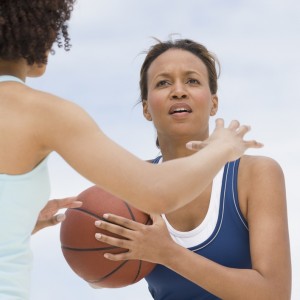 ACL Injuries in Women – Do Genes Play a Role?

There has been a potential identification of the genes that may control the higher risk of the ACL injury in women compared to men. It is estimated that over 200,000 ACL injuries occur in United States every year.

There is a disproportionate number of non-contact injuries occurring in the female athlete compared to the male athlete. A non-contact ACL injury is the most common type of ACL tear mechanism.

Non-contact ACL injuries occur when an athlete tears their ACL without colliding or being tackled by another player. A common example of a non-contact ACL injury occurs when a basketball player is dribbling the ball down the court and stops and quickly changes direction. When the athlete stops and changes direction the knee gives way and the ACL tears.

Another example of a non-contact ACL tear is when a basketball player is jumping and lands. As the player lands, the knee gives way and the ACL tears. Some studies have reported a two to eightfold greater incidence of a non-contact ACL injury in the female athlete compared to male athletes playing the same sport. Why is this? What explains the higher rate of ACL injuries in women?

We do not know. There are many theories.

This is one of the hottest research areas in sports medicine. We know that an ACL injury can be devastating for any athlete. Return to the same level of pre-injury play following an acl injury is about 65% and the risk of early onset osteoarthritis involving the injured knee is 85%. We also know that the risk of re-tearing the ACL after surgery can be very high in the athlete who is under the age of 20 and returns back to a twisting, turning, jumping type sports such as soccer.

An excellent article published in the January 2015 American Journal of Bone Joint Surgery looked at comparing the gene expression in athletes with a non-contact ACL injury and comparing men and women.

The research team was led by Dr. Jeffrey Johnson from the University of Akron Ohio. The article title is: Gene Expression Differences Between Ruptured ACL’s in Young Males and Female Subjects .

The research team analyzed the DNA from ACLs that were resected at the time of surgery.

The different DNA patterns were separated via computer software. There were several statistical methods used to examine gender related differences. What the researchers found was very interesting. They found in the group of athletes that had a non-contact ACL injury, there was an up regulation (increased) in females compared to males of the gene ACAN  (aggrecan) and FMOD (fibromodulin). They also found that WISP2 (WNT1 inducing signaling pathway protein 2) was down regulated (decreased).

Aggrecan is a proteoglycan molecule within the extracellular matrix of ligaments and many other musculoskeletal tissues. In other words, it is found in the makeup of ligaments. The ACL is the major stabilizing ligament in the knee joint. Aggrecan also plays a critical role in mediating chondrocyte and  chondrocyte-matrix interactions: it helps to controls the basic cells that make up ligaments. It is also a major structural component of human cartilage and fibrocartilage.

FMOD (fibromodulin) is found in a variety of musculoskeletal tissues, including ligaments and it controls collagen formation. It inhibits the growth of type one and type two collagen fibers. Increased expression of this may result in delayed collagen fiber formation and thinner fibers this could cause an ACL to tear more easily.

The role of WISP2 gene in ligament tissue is not very well understood it this time. The thought is if there is down regulation of WISP2 in females, it may negatively affect the strength of the ACL by decreasing ACL cell proliferation and growth. However, at this point, its exact role is not precisely known.

In summary, WISP2 is involved in collagen turnover and production. There is down regulation of this gene and therefore this may play a role for the weaker ACLs in females compared with males. We also know that significant up regulation of ACAN and FMOD, which regulate the matrix / ACL ligament, may also play a role by weakening the fibers that make up the ACL in the female athlete.

This is exciting research which will hopefully help to ultimately decrease the number of the ACL injuries in the athlete, specifically the female athlete.