There is a lot of debate over the causes of ACL tears among women and the difference when compared to male athletes. It is proven that women tear their ACLs at a higher rate than men; however, the cause has not be pinned down. While the cause hasn’t been determined yet, there are many theories surrounding this type of injury and why it is so frequent among female athletes. 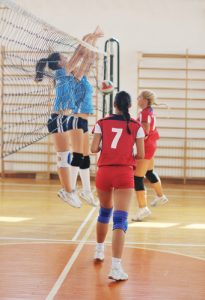 One theory focuses on the fact that as girls go through puberty, they develop strength differences in their hamstrings versus the quads. This change effects the way females land from a jump and causes some loss of hip strength. This theory has inspired many scientific studies including one in May of 2016. In May, the American Journal of Sports Medicine published a study from Dr. Catherine Wiles – out of Australia – where she specifically looked at how young girls changed their landing technique throughout the adolescent growth spurt.

The study was very unique in the sense that Dr. Wiles followed the girls as they went through puberty and measured then studied the way their lower extremities matured during this time period. Dr. Wiles measured ground reaction forces, lower limb muscle activity, and kinematic data while the girls performed horizontal leaps. The authors noted that during the adolescent growth spurt, girls experienced a vast number of rapid insightful changes to the musculoskeletal system including the structure and the function.

Through puberty, there is an increase in height and lower limb length as well as increases in anterior knee laxity. There is a lack of hamstring strength development that is relative to the strength of quadriceps. After four different test periods, Dr. Wiles and researchers found that over the course of puberty Test #1 produced completely different results compared to Test #4. This is in reference to the less flexion that the girls had in their knee when they landed their horizontal jump. They found that as the girls went through maturity, they displayed a greater hip external rotation, also.

When specifically looking at the knee, the researchers determined that the girls experienced a decrease in external rotation moment as they matured. It is possible that increased knee flexion acts as a landing strategy to protect the internal structures of the knee. This then decreases the risk of ACL injuries. A knee flexion that goes less than 22 degrees during landing can increase the potential that an athlete’s quadriceps will strain the ACL. This then increases the likelihood of an ACL rupture.

They found that with an isolated quadricep load of 200 Newtons in ACL loads with the highest at 45 Newtons at 15 degrees of knee flexion that the force on the ACL decreased by approximately 10 to 15 Newton’s with every 15 degree increase in knee flexion. This means that researchers found female athletes with a higher amount of knee flexion during a horizontal jump produce less force on the ACL.

However, as the girls matured in this study, the amount of knee flexion reduced as they did the horizontal jump. This could explain why female athletes are more prone to ACL injuries than their male counterparts.