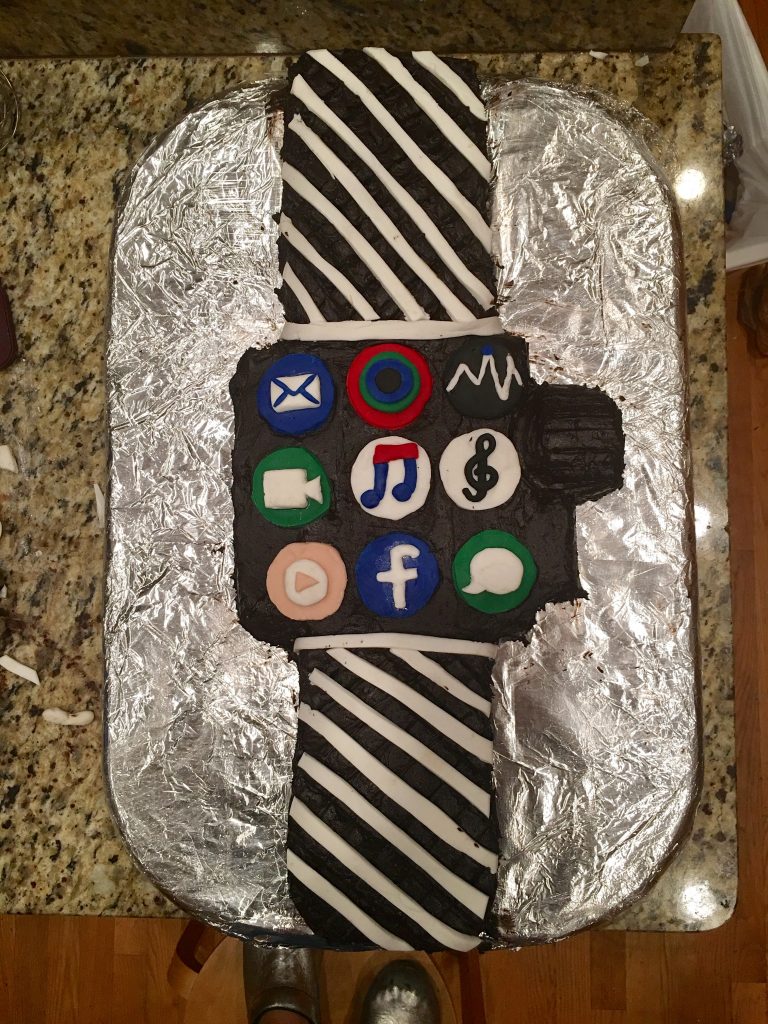 Talking about baking the Apple Watch birthday cake, Dr. Grossfeld explains that she really only bakes once a year outside of an occasional batch of cookies and apple or cherry pie.

I wouldn’t even come close to calling myself a baker. I also start with the mindset every year a couple days before Adam’s birthday that baking cake can’t be much more technical than performing a rotator cuff repair and I can perform a great rotator cuff repair.

Discussion of the process:

I found several ideas that I combined. The next step was finding the best recipe. By googling “best moist chocolate cake” I found what sounded like the perfect recipe plus it had an icing recipe attached. See below for both recipes. When making the cake I applied similar principles that I use in the operating room . For example, mixing all the ingredients is just like mixing the cement used in a total knee or hip replacement.

Adam and my husband are dark chocolate fans so I substituted Dark Hershey’s chocolate for the regular chocolate cocoa that was recommended.

Still not 100 percent sure how I was going to fashion and piece the apple watch birthday cake together while I was mixing the ingredients I decided that more baked cake to work with would be better. So I doubled the recipe for the cake and the icing. Once the cakes were baked I got out my Apple Watch and looked it very closely trying to decide what were the distinguishing feature of that watch versus any other watch.

I did not have the 9 inch cake pan like the recipe called for but had three 8×8 inch pans from the prior year’s cake so I greased and floured all three of them up. Again, because I am not an experienced baker I was not exactly sure how much batter to put in each pan without it rising as it baked to spill over the side of the cake pan. it worked out well. Sometimes it’s better to be lucky than good.

Last year was the first year I used Fondant icing . Fondant is a ready-made colored icing that can be rolled out with a rolling pin and comes in different basic colors. It has the consistency of play dough. Fondant is great for cutting out shapes and decorating the major downside is it also tastes like play dough .

As the cakes were cooling Adam and I picked out nine apps that looked like there were fairly easy to make out of the Fondant icing and were ionic to Apple . We then started the cut and paste process of using the different colored fondant and cutting tools. When purchasing the Fondant at Walmart I noticed they sold a set of relatively inexpensive cutting tools and knowing that in the operating room not having the right tool can make or break you so i tossed them into my shopping cart.

As we made the apps we glued them together with water. As they were finished I  laid  hem out on the back side of the the upside down empty center cake pan to make sure they fit properly . I tried to organize them so that the different colored apps were evenly spread out.

I then covered a larger wooden cutting board with aluminum foil and saran wrap as my base plate. The next step was to cut the different cakes up into pieces of the Apple Watch and connect them with toothpicks and the chocolate icing I made. I applied the same principles like I do in the operating room when internally fixing a fracture with hardware or applying a cast in the office. Just slightly different materials …similar basic principles.

Using Adam as my critic each step on the way on the cake construction the parts came together fairly well. The icing was applied and them the fondant apps and strips on the watch band .

The apple watch birthday cake made it successfully to the party. An unseen issue was the kids were fighting over what app they wanted as their piece of cake . No worries it was worked out successfully and everyone got their app or at least half of the app they requested.

Recipe by: RACH56 (per the website) Thank you RACH56 you are a recipe genius!

3. In a medium bowl, stir together the sugar/ flour/ cocoa/ baking soda/ baking powder and salt

5. Mix for 3 minutes with an electric mixer

6. Stir in the bowling water by hand

8. Bake for 30-35 minutes in the preheated oven until a toothpick inserted comes out clean

9. Cool for 10 minutes before removing from pans to cool completely