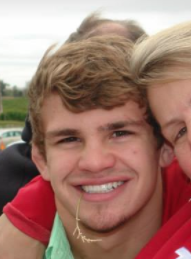 Hunter French became the 2013 State Wrestling Champion while he was a student at St. Xavier High School in Louisville, Kentucky.

Donna French and Dr. Stacie Grossfeld first met on the tennis court. Both women love the game and both have many years of experience competing at a very high level through the USTA. But when Donna’s son Hunter experienced a serious sports injury, she turned to Dr. Grossfield for another area of expertise

“During Hunter’s 8th grade year, he was 4 weeks away from regionals for wrestling and he got injured,” explains Donna. “We took him to Dr. Grossfeld and she was able to show him strengthening exercises and stretches so that he was still able to compete. Most doctors would have told him to stop competing. But she was able to treat the injury without making him stop the sport that he loved. She really understands competitive athletes and their need to be able to do the sport that they love.”

Anyone serious about their particular sport understands how important it is to get back in the game. Finding a physician capable of treating a particular injury or condition while understand an athlete’s drive and commitment makes all the difference in the world.

Shoulder Dislocation Only a Temporary Roadblock for Wrestling Superstar

As Hunter entered his junior year as a student athlete at St. Xavier High School, he faced another setback. This time he dislocated his shoulder, a serious injury that kept him off the wrestling mat. Once again, Hunter headed back to Dr. Grossfeld for treatment, but the solution was more than strengthening and stretches. This time, Hunter needed surgery followed by months of rehab.

But with Dr. Grossfeld’s help– and an impressive amount of personal determination on his part—Hunter worked his way back to the top of his game. And during his senior year, he achieved the highlight of his high school wrestling career. For his final match, Hunter had to face a top competitor ranked 14th nationally. Hunter persevered and won, becoming the 2013 state wrestling champion all while leading the St. X team to a championship victory as well. He was also awarded the Orville Williams Outstanding Wrestler Award.

According to Donna, Dr. Grossfeld’s work inspired Hunter beyond the wrestling mat.

“After all the help Hunter received from Dr. Grossfeld, he even had a time when he went off to college where he thought he wanted to be an orthopedic surgeon and sports medicine doctor just like her so that he could make the same type of difference in other people’s lives. She had a huge impact.”

A few years later, Donna noticed extreme discomfort up and down her legs while playing tennis. “I have been an athlete my entire life and I love competing. I started tennis in second grade and for years that was my passion,” she says. “But one day I bent over to pick up a tennis ball and I felt a hot fiery pain down the backs of my legs and I knew something was seriously wrong.”

Encouraged by her success with Hunter, Donna reached out to Dr. Grossfeld to diagnose the problem and treat it.  It turns out, Donna was suffering from a degenerative condition many athletes including tennis players experience called spondylolysis. When physical therapy and pain management didn’t work, Donna opted for surgery. Though she says she has lost a little flexibility, the procedure ended up being very effective. Donna doesn’t have any pain and is able to maintain a very active lifestyle… which helps her keep up with the physical activities that she loves and her new career at ilovekickboxinglouisvilleky.com … Continue to… From Corporate Executive to Entrepreneur, Competitive Athlete Donna French Offers an Inspiring Family Story of Grit, Courage, Determination