Yikes!!! My patient broke both hips in the same year. Where you break your hip will determine what type of surgery you will need to have performed.

On the left side she broke her hip in the intertrochanteric region of the hip joint. That type of fracture is treated with the intramedullary hip screw and is outlined below by the blue arrow. When the fracture involves the femoral neck it is treated with either a total hip replacement or bipolar hip replacement and is outlined below by the green arrow. 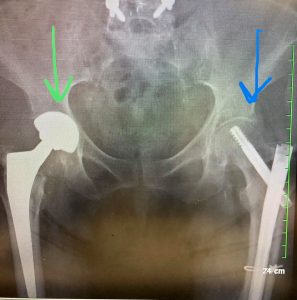 This x-ray shows the different regions of the hip joint. The red arrow is the femoral neck and the yellow area shows the intertrochanteric region of the hip. 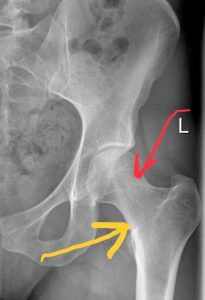 The reason two different type of surgeries are performed if you fracture your hip at the femoral neck area (the red arrow) is because the blood supply to the hip bone is disrupted and that bone will commonly die. So the hip bone is taken out and replaced with a hip replacement. When the hip fracture occurs in the intertrochanteric region of the hip, the blood supply is not disrupted so the hip can be fixed with internal fixation (see the blue arrow).