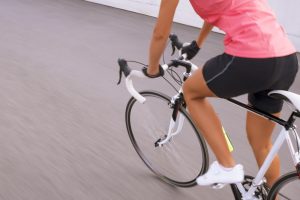 Imagine a young athlete at the top of his game– perhaps a cyclist. He works out daily, eats right, and gets plenty of rest. He is visibly healthy in every way with no familial history of cardiovascular disease. Yet this young man could be at risk for arterial disease… but why?

External Iliac Artery Endofibrosis (EIAE)– nicknamed “cyclist arterial disease”– results from repeated pressure on the external iliac, the part of the artery found in the hip area before it splits in two to run down the legs. Athletes put pressure on the iliac artery when they spend time bending forward while exercising. Over time, the artery becomes kinked and irritated. The body attempts to reduce the irritation by hardening the artery, which in turn restricts blood flow to the legs.

Symptoms of EIAE can seem fairly innocuous. Generally, the person begins to feel cramping in one of their legs when heavily exercising. For athletes, cramping is not unusual; they often feel some degree of muscle pain and fatigue when exercising. However, the cramps don’t go away; in fact, they get worse with time.

Eventually, a person with EIAE will find that the harder they go, the more difficult it is. The pain will graduate from mere cramping to more extreme bouts of pain. The person may feel like their leg is unstable and on the verge of seizing. Many patients describe the accelerated pain as burning or bursting. Eventually, they are not able to perform as they once did.

Typically arteriosclerosis is the product of old age, bad diet, smoking, and other poor health choices. As plaque builds up along the artery walls, it restricts blood flow. Cardiologists consider this as chemical irritation, unlike External Iliac Artery Endofibrosis which is a physical irritation.

While arteriosclerosis and arterial disease are very common in the United States, EIAE is rather rare. EIAE is difficult to diagnose as symptoms only appear during strenuous exercise and are often confused with general muscle fatigue. Arteriosclerosis symptoms are noticeable once a blockage occurs and require immediate medical attention.

The best treatment for EIAE is to cease training altogether and allow the body to heal. However, since doctors discover most cases of EIAE in professional athletes, quitting is not an option for some. A surgical procedure where the kinked part of your artery is removed and replaced with a bit of vein tissue in its place. Vein tissue is much more flexible and can withstand pressure a bit better. The procedure is risky. In 2007, professional cyclist Ryan Cox died while recuperating from a vascular lesion operation.

If you’re an athlete and you are experiencing debilitating pain in your leg while training, call Dr Stacie Grossfeld at 502-212-2663 today or visit Orthopaedic Specialists in Louisville, KY to seek medical care.