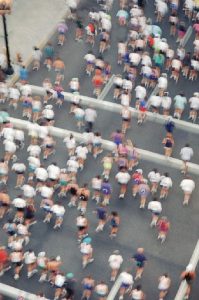 Ironman Louisville takes place this weekend and competitors from all over the world will be present to participate. The Ironman Louisville is a qualifier for the Kona Ironman World Championship held on the Big Island of Hawaii every year.

The Kona Ironman World Championship race started in 1978 on the island of Oahu with only 15 participants (12 finishers) . The distance of the ironman were set at that race with a 2.4 ocean swim, 112 mile bike ride and a 26.2 mile run. These distances were determined by combining the Waikiki Rough Water Swim, Around Oahu bike race and the Honolulu Marathon move to one continuous race. The event is now held in the lava fields of the Big Island of Hawaii and has over 2000 participants. It is estimated that over 600,000 people have completed an ironman distance.

Check out this website for more information about Ironman Louisville including a race course overview so you can go out and cheer on the triathletes.