In 1961 Lloyd Collins took on a role that he’d long remember… creating favorite memories to last a lifetime. He agreed to serve as the University of Louisville Cardinal Bird mascot. Originally from Alton, New York, Mr. Collins was a trumpet student in the University of Louisville School of Music from 1959 to 1963. During a recent visit to Louisville orthopedic surgeon Dr. Stacie Grossfeld, Mr. Collins mentioned his time as one of the original Cardinal Birds…And that is where the idea for this interview begins. 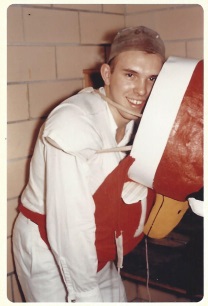 Mr. Lloyd Collins as an original U of L Cardinal Bird

A: I worked my way through college, washed pots and pans at the school cafeteria to get my food. I had a small band scholarship for a couple hundred dollars, but I really worked my way. In order to earn extra money, I sang at Highland Pres in the choir and got paid 20$ month. And I gave trumpet lessons at a music center downtown. In order to earn my lodging at school, I was a dorm counselor and the resident hall manager. Anything you want badly enough is worth working for. My parents were hard-working farmers from upstate New York.

Q: Why did you decide to go to the University of Louisville?

A: My band director in high school was getting his Master’s degree at U of L in the summer time. He told the U of L band director, Professor Leon Raper, that he had a good trumpet player. I auditioned. And they offered me a small scholarship to play in the band.

Q: How did you end up becoming the 3rd “Cardinal Bird”?

A: The cardinal bird originated out of the U of L marching band. The first two guys to serve (Dick Dyson and Sam Badgett) were students in the Speed School of Engineering. When Sam was getting ready to graduate, I asked the band director if I could do it. He agreed, saying “yes” only if I was willing to continue to march in the band during the games at half-time. So I marched with the band at half-time and would go into the locker room after to put on the Cardinal costume. I enjoyed traveling out of town for ball games whenever possible. The marching band did not travel to out of town games, but I would go with the cheerleaders.

Q: What was the job of “Cardinal Bird” like?

A: Keep in mind that this was not a paying job. I would load up my 56’ dodge and take the cheerleaders along to the basketball and football games. We’d bum together enough money for gasoline and we’d drive to wherever the game was being held. Back in the day, money was tight. Sometimes I couldn’t even afford to get my white pants cleaned and Spalding’s Dry Cleaners was generous enough to comp them on the house.

Q: What did you do as the “Cardinal Bird”?

A: During the games I loved going out on the field or at Freedom Hall to perform, often with a hula hoop. One of the high points of the game involved the time when I would lay a cardinal bird egg.

Q: What was it like wearing the original “Cardinal Bird” costume?

A: As you can imagine, wearing the cardinal bird costume was incredibly hot. In fact, I actually lost between 5 and 10 pounds from sweating every time I wore the costume. The papier-mâché head was so top-heavy, it was hard to keep it from falling off…

Q: What was the “Cardinal Bird” costume like when you wore it?

A: The costume included white paints, white spats, and black shoes. I wore a black long-tailed colonels coat pulled over a big pillow with a felt covered L that hooked to my head. The head piece was made out of papier-mâché (which I inherited from the previous cardinal birds). The head was attached to a pith helmet with straps that went under my shoulders and arms. And while wearing the mask, I could only see through one eye hole.

Q: Was there anything challenging about being the “Cardinal Bird”?

A: Aside from the challenges presented by the costume, one of the worst things about being a Cardinal Bird was when other teams like Western, Memphis State and Cincinnati, would get aggressive, trying to steal the head of my costume. As you can imagine, sometimes fights broke out. I even had a couple scrapes with fans from other schools who would try to steal my head—but they never got it off my head. 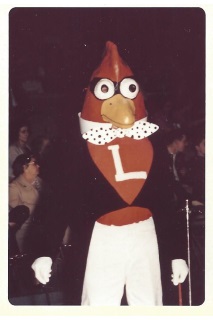 Q: Do you have any favorite memories about being a “Cardinal Bird”?

A: In 1963, a female student at U of L decided that she wanted to become a lady cardinal bird. We had a lot of fun with this, including a big marriage at Freedom Hall. Another favorite memory is when I was able to attend the Sugar Bowl. One year the basketball team was playing in the Sugar Bowl tournament and the University of Louisville’s Alumni Club chartered a train to the event. Because I couldn’t afford to pay for a ticket, the club worked out an arrangement to allow me to serve as bartender on the train in exchange for room and board. I walked from Louisville to Near Orleans on the train hustling drinks and getting tip money. Earl Ruby, the Courier Journal sports writer, was on the train at the time. He was interviewing me as I was bartending and I didn’t even realize it. When I got back home there was a big article in the newspaper about the hardest working bird in the Sugar Bowl…I also was presented as a Kentucky Colonel at half-time during one of the football games. Life was good!

Q: Did you do anything special to prepare for the role of “Cardinal Bird”?

A: No, nothing in particular. No dance lessons, no gymnastics. We just had a really good time. I would lead the cheers and everyone would join in the fun. I just like people!

Q: What did you do after you graduated from the University of Louisville?

A: After graduating from U of L, I was a band director in Bowling Green, Kentucky from 1963 to 1968. After that, I began a career in banking, and over the years I held jobs at Citizen’s Fidelity, Louisville Trust (UKB), Liberty Bank and in 1986 moved to Florida to continue my banking career. In 2013 I retired from banking, returned back to Louisville, and now I work part-time at Churchill Downs in Guest Services during the racing season. I also do data entry at the University of Louisville Medical School Continuing Education one day a week.

I married a woman from Princeton, Kentucky when I was at Bowling Green Kentucky teaching school. And I guess I adopted Kentucky as my home. We just celebrated our 50th wedding anniversary – with a trip to England, Scotland, Ireland and Wales. And we have 3 adult kids. My daughter lives in the Louisville area and I have a son in Atlanta and another in New Jersey. We also have 7 grandchildren, and 2 step grandchildren. 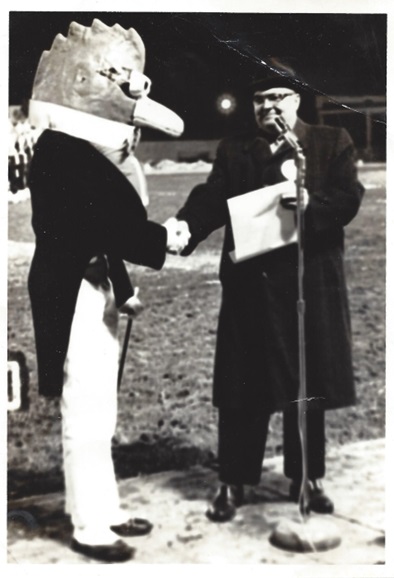 Lloyd Collins is recognized as a Kentucky Colonel during half-time at a U of L football game.

Q: How did the athletes treat you as the “Cardinal Bird”?

A: All of the athletes were very kind. They liked me. We all roomed on the same floor in the old Stevenson Hall Dormitory. They didn’t have special quarters for the ball players, everyone was together. One pay phone on the floor that we all shared and only one big bathroom with showers.

And at game time, I changed in the same dressing room as the players. They’d say: “Here comes the bird…” I never let anyone see who was under the costume. I would walk in and dress way before the fans would arrive. When people asked, I would shake my hands like I didn’t know who was underneath the costume. I would shower after the game and walk out. The crowd would disperse. Most people didn’t know who was the bird. It was a secret.

Summarizing up his experience as the Cardinal Bird, Mr. Collins reflects joyfully on the memories: “It was a great experience and one I would never trade.  I know people get tired of me telling them the story but it was an honor and privilege to be the “The Bird.”

Thank you Mr. Collins for serving as “The Bird” and for sharing your unique and inspiring story with us!