Meet this month’s patient in the spotlight, Jeffrey Robinson!

Since 2003, Jeffrey has worked as an auctioneer.

His calling began in his 20s. Every weekend, he and his father would look in the newspaper for local auctions to attend, just for fun. What began as a weekly bonding activity morphed into a time-honored ritual; so much so, that when Jeffrey’s father developed Parkinson’s Disease, they kept trying to make it happen.

Jeffrey immediately started a three month apprenticeship and took an auctioneer test, which he passed. Then, while at a Kentucky Auctioneers Association (KAA) convention, he entered an  Apprentice Auctioneer bid calling contest. He won first place out of 23 people.

“I love the interaction with people. The ability to put a smile on someone’s face and create a conversation just by running my mouth is awesome… I enjoy knowing by this gift I can raise money to help others…[It] is a great feeling. Being a Freemason, part of our motto is faith, hope, and charity, and I love helping charities and those less fortunate.”

Jeffrey’s skill as an auctioneer draws crowds far and wide. In fact, he often gets told, “I like to come just to hear you talk.” He loves the interaction with people, especially seeing their excitement.

He’s currently looking forward to the Childhood Cancer Family Fund’s Trivia Night and Auction: Music Edition, held at Bearno’s on May 14th. This incredible event will raise money to buy Christmas presents for cancer patients and their families at the St. Jude Target Family House. Learn more and sign up here. 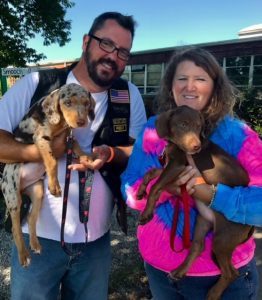 Jeffrey and his wife at Barktown Animal Rescue