Meet this month’s patient of the month Michele Chambers! 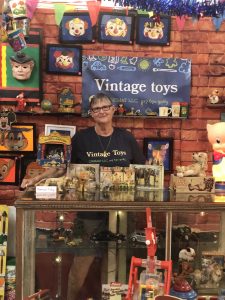 Originally from Ohio, Michele moved to New York City Manhattan in 1978 fresh out of college where she ran a flower and plant design business for over 25 years. “When I first moved to New York, I worked for probably half a dozen different short-term jobs. I had a bachelor’s degree in Fine Arts and an associates degree in floriculture. After working in a few flower shops, I went out on my own as a freelancer and then decided to start my own business.”
In 2015, Michele moved to Louisville after her wife and business partner of 27 years died suddenly. A little over two years ago Michele married her second wife at the Cathedral on 4th Street, saying “It opened up a whole new dimension to living a happy life.”
Currently Michele runs an antique toy shop. “I’ve always worked with my hands so I started buying vintage toys and working on them. This winter I opened up a vintage toy booth store at Fleur de Flea market. I love what I do! I love meeting people, talking about toys, selling toys, buying toys, it’s great fun!”
Fun Fact: 80% of the toys Michele has in her shop she has repaired herself, often with dental tools!
In 2014, Michele fell and broke her knee cap. In 2017, she discovered that the wires wrapped around her knee cap to help keep it in place had stretched and were growing into her ligaments. Michele immediately called Dr. Grossfeld who helped repair the problem. “Dr Grossfeld has helped me tremendously! I wouldn’t think of going to anyone else.”