Meet this month’s patient in the spotlight, Savannah Schneider! 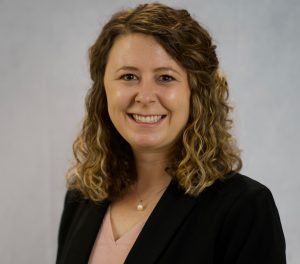 Savannah has been a longtime patient of Dr. Grossfeld. In the 5th grade, Savannah began seeing Dr. Grossfeld for knee issues, specifically patellar dislocation. Savannah’s knee issues stemmed from soccer, a sport in which these sorts of injuries are not uncommon.

Patellar dislocation and patellar instability occur when the patella partially or fully leaves the trochlea, which is a groove in the femur where the patella normally sits and glides. This is a fairly common injury, especially in athletes as it can be caused by contact. Patellar dislocations can cause intense pain and swelling, and usually result in the inability to walk, making them very serious despite the frequency at which they occur. Generally these dislocations are treated with physical therapy and common practices such as resting, applying ice, and using compression. However, individuals who experience recurrent dislocations often need surgery to repair ligaments in the area that can be damaged during the dislocation.

Dr. Grossfeld began Savannah’s treatment with physical therapy, but when it became clear something more was needed, she opted for surgery. Besides a re-injury and subsequent surgery in highschool, Savannah’s patella issues were successfully treated, and with some preventative strengthening exercises she remains healthy today!

That’s not where Savannah and Dr. Grossfeld’s relationship ended though. Interested in pursuing medical school, Savannah was inspired by Dr. Grossfeld and looked to her as a mentor: “I have been a patient of Dr. Grossfeld’s for years and she was a huge part of me deciding to pursue medicine… As a woman in medicine Dr. Grossfeld opened so many doors directly and indirectly.” 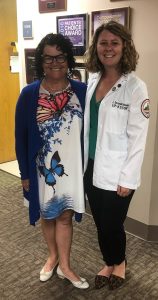 From networking to MCAT study book suggestions, Dr. Grossfeld and Savannah built a solid relationship, and Savannah even spent some clinical rotations in the Orthopaedic Specialists office!

Dr. Grossfeld has partnered with both the University of Louisville and Centre College to act as a mentor, and provide internships to students interested in medicine. She is particularly interested in serving as a mentor to encourage female medical students to consider careers in orthopedic surgery.

Savannah studied at the University of Pikeville’s Kentucky College of Osteopathic Medicine and is now moving on to her residency at the University of Louisville. When she isn’t busy with the heavy workload of med school, she enjoys staying fit with spin classes at CycleBar and playing with her dog Petey. We wish Savannah the best as she continues her professional career!