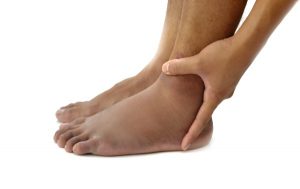 Edema is a medical terms that refers to swelling caused by the body holding onto fluid. Edema, which was once called dropsy, usually occurs in a person’s feet, ankles, or legs. There are some occasions where edema can also occur in a person’s hands, face, or even affect additional body parts. There are many different kinds of edema and the causes can vary from diagnosis to diagnosis. Edema is often a symptom of another, more serious, condition and should be treated by a medical doctor. Two common forms of edema are pitting edema and non-pitting edema. These are the most common classifications of edema and are easily identifiable.

Pitting edema often affects areas of the lower body including the feet, legs, and ankles, but can occur anywhere on the body. This condition is often a local problem that involves the veins, but can also be a problem within one of your body’s systems of organs. Pitting edema can be a result of problems with the liver, kidneys, heart, or even the lymphatic system. Regardless of where the pitting edema is occurring, it is a sign that your body is holding onto fluid or fluid is not being carried away as it should. If these symptoms apply to you, you should seek medical help immediately.

While pitting edema can usually be associated to a problem with the liver, kidneys, heart, or lymphatic system, there are many other causes that can result in pitting edema. Some of those various issues include:

Diagnosis for pitting edema is somewhat difficult since a list of telltale signs for diagnosing this medical issue does not exist. However, through a set of tests and an extensive evaluation that may include a chest x-ray, blood work, and a heart echo can help a physician identify pitting edema. If you are diagnosed with pitting edema, there are a wide variety of treatments available. Some treatments can be applied at home while others must be performed by a practicing physician.

When it is extremely difficult for lymph fluid to drain as it should, it is often due to a blockage. This condition is called lymphedema. Some people are born with this condition while others develop it. Those who develop lymphedema often develop it after surgery or as a secondary condition to a bigger issue. When this lymph fluid cannot drain, it gathers and swelling results.

Another condition that can be linked to pitting edema is myxedema. Myxedema can be identified by severe swelling in the legs and feet, but swollen eyelids and lips are also symptoms. Tongue swelling is another symptom of myxedema though it is not as common as the swelling observed in other areas of the body. Most people who suffer from myxedema suffer from hypothyroidism – both severe and advanced cases.

These three causes of non-pitting edema can be diagnosed by unusual swelling. Once a doctor identifies unusual swelling, they will review medical records and do a wide variety of tests to diagnose. Among the three medical conditions, lipedema is the hardest to diagnose and requires a physical examination. During the exam, doctors will look for: tender skin, excessive weight, and bruising. Once non-pitting edema is diagnosed, depending on the condition associated with it, the treatment plans vary and are determined by a trained physician.