The risk of tearing your ACL on synthetic surfaces has become a hot debate among physicians, coaches, and players.

With the level of competition improving and more year-round programs developing, synthetic surfaces are becoming the arena for many sports. In an American Journal of Sports Medicine article, published in July, 2015, Dr. George Balazs and his team looked at 963 ACL injuries. These injuries were reported on soccer or football fields. These reports were used to determine if synthetic surfaces increased the risk of tearing your ACL.

They stated that since the introduction of artificial turf in the 1960s, use has been a source of controversy. In trying to determine whether they are placing the athletes at increased risk, they looked at many factors. For one, artificial turf has largely been used as a secondary option to grass fields; however synthetic surfaces have increased durability, equate less cost, and present more consistent field conditions than natural grass. They also noted there’s been a steady increase in the use of artificial turf among  competition levels since the ’60s.

Over the past five decades, manufacturers have made significant changes to synthetic field surfaces. Some changes include: the fiber type used and its density, an increase in under-field padding, and the addition of rubberized soles to give the surface a more natural feel. All these changes have been made to ideally decrease field-related injuries. 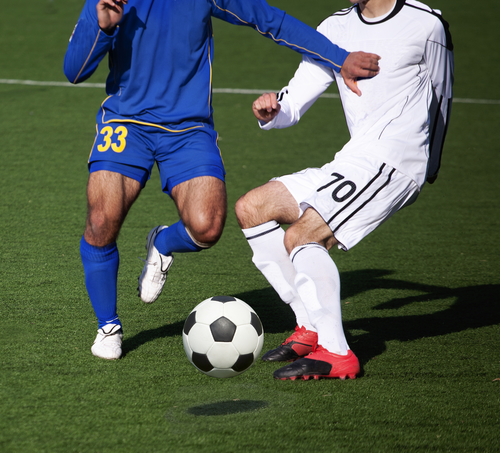 The authors noted that biomechanical studies have generally supported increased friction force on all types of artificial turf.

Theoretically this increases the risk of injury relative to natural grass. The potential elevated risk of tearing your ACL is a critical concern to athletes, coaches, team trainers, and physicians. The authors also stated that their study would evaluate data related to the effect plain surfaces had on the ACL. After reviewing journal articles, they found  there was an increased risk in American football players, but not in soccer players.

Part of the issue on evaluating whether artificial turf is the cause of lower extremity injuries is the result of multiple factors that may influence athlete injury rates. These include: field moisture, precipitation, and the temperature. Other factors like player position, types of play, period in the game, timing of the game within the season, legal or illegal play by an opponent, and type of shoe wear also affect study results.

There was no indication that an athlete participating in soccer had increased risk of ACL injury on modern artificial turf. The authors felt that more comprehensive studies looking at other factors needed to be completed to give a better answer as to whether artificial turf does increase the risk of tearing your ACL. But, based on the literature they reviewed in their analysis study, they noted that American football players are at increased risk while soccer players are not at increased risk for tearing their ACL based on turfs types. So good news for soccer players, but not the best news for football players!