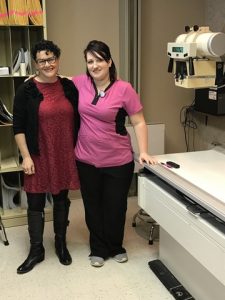 Ashley Milburn (right) and Dr. Stacie Grossfeld stand in the Orthopaedic Specialists office. Dr. Grossfeld is excited to offer treatment to Spanish speakers in the Louisville area thanks to Ashley.

Ashley Milburn graduated from ATA College in Louisville, Kentucky. She completed the Limited Medical Radiography with Medical Assisting program (LMRMA) with an impressive 4.0 grade point average. During her time as a student, she did an externship at Dr. Grossfeld’s medical practice, Orthopaedic Specialists. And when she finished her degree, Dr. Grossfeld invited her to join the team.

Originally from Willisburg, Kentucky, Ms. Milburn grew up helping her family on a tobacco farm. During this time working with many Spanish-speaking farm employees, she became very interested in learning Spanish. Though she never received formal training, she is now a fluent Spanish speaker. She explains: “If you want to know what people are saying, you try hard to learn.” Realizing the many benefits of speaking both English and Spanish, Ms. Milburn is also raising her three children to be bilingual.

Along with working as a translator for Spanish speaking orthopedic patients, Milburn is currently working on translating all of the paperwork at Orthopaedic Specialists into Spanish including: surgery packets, pre-op and post-op instructions, sign in slips, new patient paperwork, and worker’s compensation paperwork.

Right now, Orthopaedic Specialist is accepting all new patients including those who are Spanish speakers.