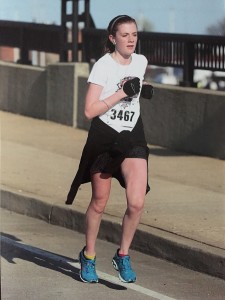 Marissa Lowe is a talented young woman with an inspiring passion for running. And it all could have come to halting stop during her junior year in high school. While running in her second cross country meet of the season, Marissa suddenly felt a stabbing pain in the top front of her left thigh. After she crossed the finish line, she tried to downplay the injury, but her mother Betsy suspected something more was wrong.

When the pain did not go away after a few days, Betsy made an appointment with Dr. Stacie Grossfeld at Orthopaedic Specialists. After examining Marissa, Dr. Grossfeld had her in for an MRI at 7:30 a.m. the next morning.

Within two hours, Dr. Grossfeld called to explain that Marissa needed to be on crutches immediately. She had a stress reaction in her femur that could turn into a very serious stress fracture if she was not careful. While some people would have immediately stopped physical activity altogether, as a very competitive high school athlete, Marissa was hopeful that she could maintain some level of fitness. 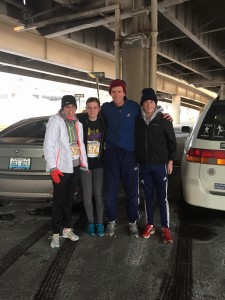 Marissa and her family before the 2015 Anthem 5K – the first leg in the Triple Crown Races.

Dr. Grossfeld understood Marissa’s passion for her sport, and she worked closely with Marissa to provide her with clear instructions about the types of physical activities she could and could not do. Over the course of six weeks, Marissa gradually engaged in different types of activities including swimming and the elliptical machine, to maintain as much of her fitness as possible.

Two weekends before the state cross-country championships, Marissa was able to return to the sport she loves to compete in a cross country meet. She surprised everyone when she ran the same time as her first race of the year, before she was even injured! Though she lost six weeks of training, she did not lose any time. And this is due in large measure to her incredible dedication and determination, and to the fact that Dr. Grossfeld was willing to work with her to help her stay active while successfully healing her injured leg.

One of Marissa’s long time goals was to compete in and finish the Louisville Triple Crown running races, and the Kentucky Derby Mini Marathon before she graduates from high school and goes off to college. As a senior at North Oldham High School this year, her parents finally agreed. 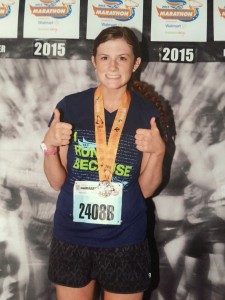 Next year Marissa’s heading off to Brigham Young University. Though she’s still deciding whether she’ll run cross-country in college, there’s no doubt that there are many great races ahead for this inspiring young woman. Way to go Marissa!