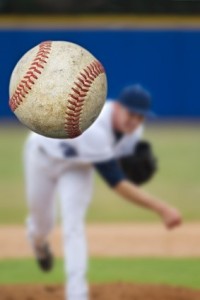 A great review article on ulnar collateral ligament injuries of the elbow in the throwing athlete was published in the May 2014 Journal of American Academy of Orthopedic Surgeons. This is an important topic given that UCL reconstructions have increased approximately 10 fold in the first decade of the 21st century.

The review article was written by Jeremy Bruce M.D. and James Andrews M.D. Dr. James Andrews has taken care of more elbow injuries in professional throwers than any other orthopedic surgeon in the world. He has performed the Tommy John operation over 2,000 times.

Repetitive valgus forces on the throwing elbow can place abnormal stress on the joint. In the thrower, many times the chronic wear predisposes throwers to an acute injury. During the mechanism of throwing, a significant valgus force is placed on the elbow. This is located on the inner side of the elbow. The inner side of the elbow is stabilized by the UCL (ulnar collateral ligament) as know as the Tommy John ligament.

There are three bundles or sections that make up the ulnar collateral ligament of the elbow: 1) oblique, 2) posterior and 3) anterior bundles. The anterior bundle provides the main valgus support in the pitching motion and is the main restraint to valgus force from 30 to 120 degrees of elbow motion.

Make sure to check the ROM of the elbow and shoulder to evaluate for motion deficits, especially glenohumeral internal rotation and total rotation. Failure to address abnormal shoulder kinematics can be detrimental to the outcome of UCL injuries. Sometimes an ulnar collateral ligament elbow injury starts as a compensatory mechanism because of a shoulder problem.

In complete or partial tears of the ulnar collateral ligament there may be little to no laxity that can be detected on physical examination. Named phyiscal tests for UCL injuries include: the milking maneuver, moving valgus test, and the valgus extension overload test.

MRI testing can help define the soft tissue anatomy . An MRI arthrogram will give more detail and give more accurate results as compared to a plain MRI scan. The T- sign is seen when a pathological amount of dye leaks down along the sublime tubercle but is contained under the superficial fibers of a partially torn UCL. This is the most common finding seen on an MRI arthrogram.

Studies have examined youth pitchers and found that players who pitched more than 100 innings a year had a 3.5 times greater chance of sustaining a serious injury. With this in mind, it is advisable that young pitchers are limited to 100 innings in any calendar year.

It may also be recommended that youth players do not play baseball year round to ensure a period of active rest from throwing in the off season. Youth pitchers are also discouraged from pitching for multiple teams and showcases because doing so has been associated with elbow pain and a potential elbow injury.

A ten year prospective study revealed that overuse is the biggest risk factor for injury. Some of the research results include:

– 500% increased risk for surgery in youth pitchers pitching more than 8 months a year.

It is also recommended to limit curve ball pitching at an early age because of the high level of neuromuscular control needed to throw with proper mechanics.

Education is still needed to reduce the risk of elbow injuries for throwing athletes. A recent study on public perception of pitching showed that 31% of coaches, 28% of players and 25% of parents did NOT believe that the number of pitches thrown was a risk factor for injury.

An equally scary statistic is that 51% of high school athletes, 37% of parents and 30% of coaches think that UCL (Tommy John surgery) reconstruction should be performed on players WITHOUT an elbow injury to enhance performance.

Non surgical management of an UCL Injury of the Elbow

It is very important that the return to a throwing program is gradual and guided by a skilled physical therapist or athletic trainer in order to keep the athlete pain free until competitive play is allowed.

Outcomes After Surgery For A UCL Injury

– Average of 4 months after surgery to return to throwing