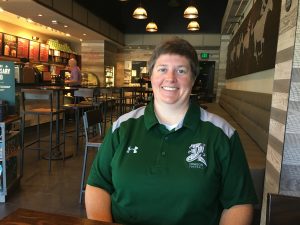 Born and raised in Wisconsin, Kelly has over 12 years of experience serving the South Oldham community.  She works as an employee for Baptist Sports Medicine with a full-time job at South Oldham High School.

While many of us go through college having no idea what we really want to do for a long-term career, Kelly was fortunate. After suffering from several knee injuries in high school, she was sent to her school athletic trainer. She explains: “When I got exposed to the profession as a patient, I just realized, wow, this is really cool … this is something I’d love to do.” 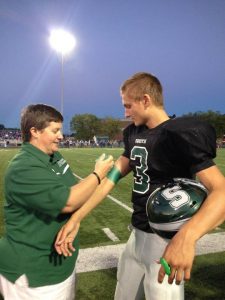 After graduating from high school, Kelly attended Winona State University in Minnesota, earning a B.S. in Exercise Science. And then she went on to Indiana State to complete her Master’s Degree.  The summer before starting graduate school, Kelly landed an internship at a Lexington Sports Medicine Clinic. “I really liked Kentucky,” she explains, “and I have some extended family in Oldham County so that was definitely a location that I was interested in…” But at graduation time, there weren’t any job openings in the area, so Kelly went home to live with her parents while looking for a job. Three weeks later she was offered a position in a small school near Lansing, Michigan and off she moved.

In the spring of 2005, Kelly saw a job opening serving South Oldham High School and she decided to apply. After a series of interviews, she was very excited to be offered the position, but would only accept under the condition that she could finish out the school year she’d already started in Michigan. She was dedicated to the athletes and the school system that she was serving and didn’t want to leave them during the middle of the school year.  This is just one small example of the type of character Kelly exudes.

Kelly’s day varies significantly depending on the time of year but one thing that remains a constant – her work is almost always busy.  For example, during the summer when many educators enjoy some R&R, Kelly is immersed in preseason which kicks off July 15th. Preseason field hockey practice generally goes from 6 a.m. until 8 a.m. followed by soccer from 8 a.m. until 10 a.m. Cross country is often in the morning too, and then around 2 p.m. in the afternoon football starts.  The late afternoons and evenings are busy too with practices for volleyball, and boys and girls soccer between 4 p.m. and 10 p.m. 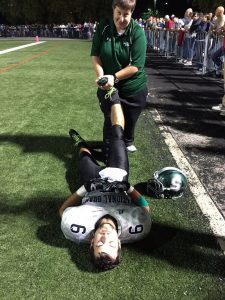 Not only is she there to treat sports injuries as they arise, but she also works hard to understand the fundamentals of all the different sports. She explains that knowing the mechanics of each sport really helps her understand the physical challenges the athletes face. Then she’s able to work with coaches to focus on injury prevention while adding sports-specific exercises to the warm-ups.

During the school year, Kelly makes her daily rounds to practices, works to treat any of the injured athletes, and then frequently attends games. On a rare day, when there aren’t any games, she might make it home by 8 p.m. More often than not, it’s later. But to Kelly, this isn’t just a job, it’s a calling. When she talks about the kids, the sports teams and her work, her face lights up with excitement. “These kids are like my kids…” she explains, “All 400 of them…I absolutely love my work. It’s where I’m supposed to be.”

Student Athletes One of Many Stakeholders for School Athletic Trainers

While student athletes are obviously an important part of an athletic trainer’s job, school athletic trainers like Kelly also work very closely with teachers, parents, coaches, physical therapists and doctors. Additionally, as an employee of Baptist Sports Medicine, she also a team there that she reports to and meets with regularly. She wears a lot of different hats in an ordinary day which may include notifying coaches and parents about which athletes are ready to return to sport and 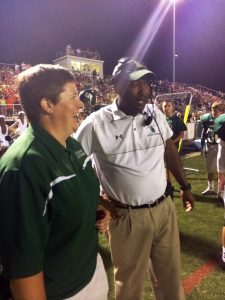 which are not, offering injury prevention tips to a particular sports team, helping out at games to support any injured athletes, completing paperwork documenting all of the treatment she provides, and working with kids and parents to help connect them to the right medical professional when necessary.

“She’s a really well established, great doctor, and she works so well with the kids and parents. She is really good at communicating and explaining what’s going on which is extremely helpful. If kids need to get in for more specialized treatment, Dr. Grossfeld can help speed up the process to make things easier on everyone.”

One in a Million in the World of Athletic Trainers

While there are lots of great athletic trainers out there, Kelly really stands out. Her dedication to the kids she serves, and to the entire school community, is unusual and inspiring. Dr. Grossfeld quickly became aware of this through her work with Kelly. Dr. Grossfeld explains: “Kelly is so loved at South Oldham that whenever she comes off the field after taking care of an injured player, like in the middle of the football game, all of the students chant: Kelly, Kelly, Kelly!!! It is really crazy. She is a true icon. She’s amazing. I’ve never worked with a trainer before that has this kind of rapport with the students, coaches and the parents. She’s like a celebrity. And she truly loves every one of those kids. She pours her heart out every day during that job and works countless hours.”

As elaborated by Dr. Grossfeld, one of the keys to Kelly’s success at South Oldham is her connection to everyone that she works with. All the coaches know to call or text her if anything happens. Kelly’s cell phone is always with her, and she makes a conscious effort to touch base with each of the sports teams on a daily basis. She wants to know if they need anything, how things are going, and just to be a presence so the kids are used to seeing her around and that they know she cares. 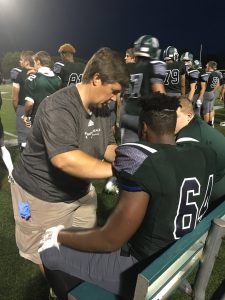 Her “office” aka the training room is frequently filled with kids …

Some are doing rehabilitation exercises, others are being treated for new injuries, and some just stop by to hang out in one of the coolest places in the school.  Kelly talks about being an understanding adult that the kids can talk to and confide in, seeing her role as supporting more of the whole person and not just the injured athlete.

“When it comes to being an effective athletic trainer, I’m focused on the entire kid, emotionally, mentally and physically. I want the kids to be healthy in every way. Sometimes that even means they need to step away from a sport to get some balance, and that’s OK.”

Kelly is also honest and direct with the kids – a self-described “realist” but with a warm smile and a big heart. Kelly explains that not every school community is as fortunate as South Oldham. “I’m a part of a really great thing,” Kelly explains, “Baptist Sports Medicine is committed to doing the right thing for the kids and this helps to make my job great. Not every student is as lucky. I want the kids to be aware of the opportunities that they have.”

New research is always coming out in sports medicine and Kelly does her best to stay up on the latest. She completes continuing education as part of her certifications, and she does a lot of reading and sharing through her employment with other athletic trainers at Baptist Sports Medicine and also online with other athletic trainers across the country. 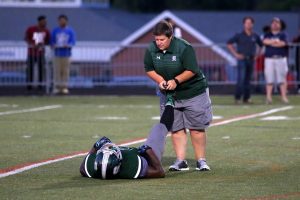 Interestingly, different states deal with things differently. For example, in the State of Kentucky, every concussion is evaluated by a doctor. In comparison, some other states do not have any policies around concussion treatment.

Some of the most common injuries Kelly sees on a regular basis include sprained ankles, and muscle strains in the quads and hamstrings. This is particularly common at the beginning of the school year when the kids might have taken a summer break and then start practicing two times a day. Sometimes Kelly has to treat much more serious injuries like compound fractures or concussions.

What Inspires a Great Athletic Trainer

Explaining her approach to athletic training, Kelly credits one of her early teachers, Stacey Czaplewski, as having a major influence on her.  She also emphasizes how important it is to consider what each kid is going through.  Kelly explains: “As an athletic trainer, I really try to be a positive influence to the kids that I work with. I have a genuine interest in the kids as people, and work hard to get to know and understand where they are coming from and find it humbling to realize how much they watch what I am doing. I want to be a positive role model for them.” 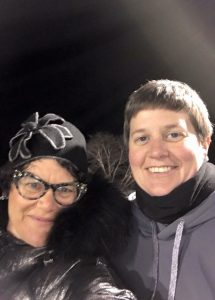 When Kelly isn’t busy working, she still enjoys spending time with her family which she describes as very close knit. Her immediate family includes her mom and dad and a brother and sister. Every year her family vacations together… and Disney is one of their favorite locations. Not surprisingly, Kelly is also a sports fan. She loves cheering on her favorite teams, the Green Bay Packers and the Wisconsin Badgers. She also enjoys playing golf and looks forward to a time when she might have more of an opportunity to fine tune her game.

Kelly serves on the Senior Advisory Council of Baptist Health Sports Medicine. She also volunteers at HighPoint Charitable Ministries in LaGrange, a non-profit program that provides food to people and families in need.

All of us at Orthopaedic Specialists are very grateful to Kelly for the amazing work that she does working with kids, as an athletic trainer and an all-around great mentor and role model. The athletes at South Oldham High School are definitely fortunate to have Kelly at their school.