Many parents are increasingly concerned about chronic traumatic encephalopathy. In order to provide insight into this issue, Shawn Love B.S. and Dr. Gary Solomon at Vanderbilt University Medical Center in Nashville, Tennessee, wrote an informative article: “Pain Physicians’ Corner” published in the American Journal of Sports Medicine in May 2014.

If you are interested in learning more about chronic traumatic encephalopathy, follow along for some helpful information.

What is Chronic Traumatic Encephalopathy or CTE?

Chronic traumatic encephalopathy is a condition developed from repetitive hits to the head or a concussion that can only be diagnosed postmortem. There is no testing that can be done at this point to diagnose CTE. There have been a series of studies conducted in football players that have died with early onset dementia, their brains have been evaluated by a pathologist and found to have abnormal TAU protein. CTE clinically can lead to neuropathic changes and development of a series of neuropsychiatric conditions, behavior changes, and cognitive deficits. 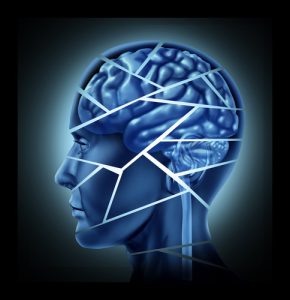 The final diagnosis is made postmortem when the brains are identified and found to have increased TAU protein and widespread neurofibrillary tangles (NFTs). In the past, CTE was called punch drunk syndrome. Doctors, such as Ann McKee, and Dr. Bennet Omalu (is most famously known for his lead role in the movie Concussion, which Will Smith was the actor representing Dr. Bennet Omalu). These doctors have suggested that CTE has a clear environmental origin. The groups have proposed that head injury, both concussive and sub-concussive, leads to neuropathic changes and the subsequent development of a series of neuropsychiatric symptoms, behavior changes, and cognitive defects.

What are the symptoms of CTE and when does it start?

In general, CTE is described as comprising a broad set of clinical signs and symptoms including neuropsychiatric and behavioral changes such as depression, mood lability, agitation, impulsive behavior, and aggression, Parkinson’s disease, difficulty speaking, gait abnormalities, and cognitive defects including impairments in memory, attention, and language.

CTE has been described as a syndrome that manifests within one to two decades after retirement from contact or collision sports. There are some studies that indicate CTE may start as late as 10 to 20 years after retirement.

Are concussions the only cause of an abnormal TAU protein formation in the brain?

Another condition that can cause greater incidence of abnormal TAU protein deposition in the brain has been found in drug abusers, people who abuse opioids. There was a study that looked at opioid abusers less than 40 years of age compared with controlled who are not using opioids, and they found greater incidence of TAU protein deposition in their brains compared to the controlled group, 44% versus 19%, and at parallel findings. They found that more than half, 52%, of the 644 surveyed players from the NFL reported opioid use during their NFL playing careers and most of these 71% reported abuse. The prevalence and current opioid use, 7% among NFL retirees, is three times higher than that of the general population.

What are the chances an athlete would develop CTE?

The answer at this point is unknown. What is known based on early studies is that at least 3.7% of NFL players would develop CTE in their lifetime on the basis of neuropathic evidence of the disease in 12 of 321 American Football Players between February 2008 and June of 2010. The number of concussive of sub-concussive events as well as the amount of athletic exposure required to trigger CTE is unknown. Current studies are being completed at this point to have answers to these questions.

How many adolescents and young adults have been diagnosed with CTE?

Does CTE cause suicide? 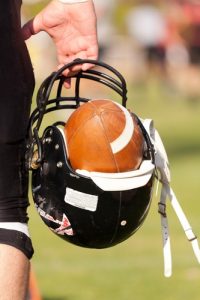 players diagnosed with CTE. Despite implications that CTE may be a risk factor for suicide, there are currently no published studies discussing CTE as the causation of suicide. This is a difficult question to answer because the cause of suicide is often multi-factorial and may be too intertwined to be distilled to a single specific cause.

Are contact and collision sports a major risk factor for severe brain injury or death?

Football fatalities average 12.2 per year with 3.1 being related to brain injuries with a slightly higher risk in collegiate versus high school athletes. At this point, there is evidence to indicate that in the adolescent population, there are greater risk for a disabling brain injury or death from riding a bicycle, walking on the street, or being in an automobile accident.

Chronic traumatic encephalopathy is described as a progressive neurodegenerative process associated with one or multiple blows to the head characterized by changes in mood, cognition, and behavioral functioning. CTE symptoms are said to develop anywhere between 8 to 20 years after retirement from a collision sport. There have been fewer than seven documented causes of CTE in American high school football players. The current evidence indicates there is no definite relationship between CTE and suicide. The authors of the study noted that future well controlled longitudinal studies will provide more definitive answers to these questions.