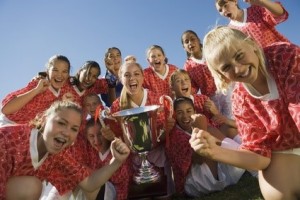 Typically a clavicle fracture will heal without surgery. The fractures that are at risk for not healing or healing in a position that can cause dysfunction to the shoulder are the ones that are shortened greater than 2 centimeters, communition at the fracture site (fracture is in more than 2 pieces) and 100 percent displacement (no bone to bone contact at the fracture ends). The above mentioned clavicle fractures would be considered for surgery intervention.

If surgery is necessary to repair a clavicle fracture, a plate that is specially designed to conform to the shape of the clavicle is placed and held with a series of low profile screws. The surgery is performed as an outpatient procedure.

If the clavicle fracture does not exhibit the above mentioned findings on x-ray then conservative treatment is instituted. Conservative treatment typically consists of being placed in a sling for comfort, an oral NSAID medication for pain control, and ice being applied at the fracture site until the swelling has reduced. Sometimes short term use of pain medication is needed especially to help with sleep.

As the fracture fragments begin to heal the pain drops significantly.  In patients with open growth plates this occurs very rapidly within 2 to 3 weeks. Return to a contact sport can range from 6 weeks to 3 months based on the type of the clavicle fracture pattern and the specific sport.

Concussions are also common in the fall high school sports. The highest incidence is among soccer and football players. In 2009 the Lystedt Law was passed in the state of Washington and has subsequently been adopted by all states except one. The goal of this law was to reduce the number of student athletes suffering from concussions. Concussions have been proven to cause short term and potentially long term permanent cognitive effects (brain damage).

In summary the Lystedt Law required athletes be removed from a game or practice when they developed symptoms that were consistent with a concussion. The injured student athlete could not return until they were seen by a healthcare provider that was trained in the diagnosis and management of concussions.

The law also requires that the student-athlete, parents and coaching staff undergo education on identifying and preventing concussions. A consent is also signed by both the coaches, the athletes and the parents annually.

There are some helpful resources available on preventing concussions. The Center for Disease Control has an excellent online program for education: “Heads Up: Concussion in Youth Sports.”

The ACL injury is a devastating knee injury that occurs most commonly in female soccer players.  It is a season ending injury that can result in early onset osteoarthritis. It is associated 50 percent of the time with meniscal tears and can be associated with cartilage damage that causes long term pain and disability to the knee.

ACL prevention programs have been reported to reduce rates of the ACL injury by 60 percent. The PEP program or variations of it have been instituted in the high schools where I am the team physician. If a student athlete tears their ACL a reconstruction is recommended.

Repairing the torn ACL by suturing the ends back together does not result in healing of the disrupted ligament. A reconstruction must be performed which requires obtaining tissue or a graft from some other part of the body.  The most common options range from taking part of the hamstrings tendons or the central one third of the patella tendon.

If at the time of surgery either the medial or lateral meniscus is torn: a repair or partial menisectomy will be performed based on the tear pattern. Typically patients are on crutches 10 days to two weeks. They are started in physical therapy within 10 days of surgery and may need some PT pre-operatively depending on their injured knee.

Return to full competitive play is around 6 months post surgery. Based on the scientific literature around 67 percent of the athletes will return back to competitive play after surgery and rehabilitation.