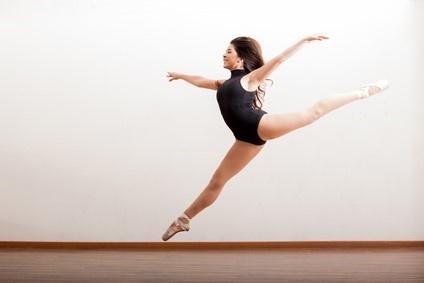 Why do dancers (ballet and modern) have a lower incidence of ACL injury compared to other athletes?

A great study conducted at the Harkness Center for Dance injuries in New York City in conjunction with the Langone Medical Center Hospital for Joint Diseases looked at the biomechanics of landing from a jump between the two groups. It was a two part study published in the American Journal of Sports Medicine in May of 2014. The research group was headed by Dr. Marijeanne Liederbach.

It is documented that poor landing mechanics from a jump such as a rebound can lead to an ACL tear and injury. Poor biomechanics such as an increase in knee abduction, hip adduction, low flexion angle when landing, increase use of quadricep muscles compared to hamstring muscles, and excessive truck tilt results in a higher incidence of ACL injury.

The study looked at 4 groups of athletes: male and female, dancers and team sport athletes. They had the athletes do a single leg drop jump from a 30 cm platform. Joint kinematics and kinetics were compared between groups and genders using multivariate analysis of variance and pair wise t tests.

The hypothesis from the authors as to the reason the female dancers had excellent landing techniques was that dancers spend hours working on jumping and landing techniques which start at an early age in their training and continue throughout their career.

The second part of the study looked at the 4 groups and what happened to their landing technique when they were fatigued. The study found that the dancers took typically a longer period of time before they became fatigued. Once they did become fatigued they start exhibiting signs of poor landing techniques.

This study shows how it is important to focus on strengthening the muscles around the hip and knee in addition to making sure that the athletes have excellent landing techniques if an ACL tear is going to be prevented.

Even with excellent landing techniques, when the muscles become fatigued, they start to place the athlete at risk for an ACL injury. Again focusing on proper landing technique and improving endurance is important in all athletes in the prevention of an ACL tear.