Sports are a great outlet for children to be active, develop social skills, and learn the importance of teamwork. According to The Boston Globe, three out of four American families with school-aged children have at least one playing an organized sport. This is a total of roughly 45 million children. It’s important that kids are allowed to play the sports that they love, and do it in the safest way possible. Unfortunately, injuries come with the territory, and some are more serious than others. Concussions are one of the most important sports injuries to recognize. 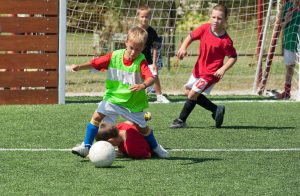 The Centers for Disease Control and Prevention defines a concussion as a type of traumatic brain injury caused by a bump, blow or jolt to the head.  Concussions may also occur during impact to the body, causing the brain to shuffle back and forth within the skull. It’s reported that about 175,000 children per year are treated for concussions due to sports-related injuries nationwide.

Concussion symptoms come in many different forms and have serious physical, cognitive, and emotional side effects. Some common symptoms of a concussion include: pupil enlargement, drowsiness, recurring headaches and slurred speech. In addition, many people suffering from concussions experience numbness, vomiting, confusion, and even loss of consciousness.If you are a parent, coach, teacher, or some other kind of caregiver to children, it’s important that you pay close attention to your child’s behavior after an injury. If symptoms seem to worsen, take them to the emergency room immediately. You should also seek qualified medical attention if symptoms do not improve in a timely manner.

Every athlete is different, but depending on the individual and the severity of the concussion, athletes are sometimes required to wait days, weeks, or even months before returning to athletic activities.Though good treatment for concussions is available, if possible it is always best to try to avoid these risky head injuries. Follow along for 7 best practices to help avoid concussions.

Concussions are not something that your child can simply “tough out.” And suffering from multiple concussions can lead to long-term cognitive damage. In fact, chronic traumatic encephalopathy is a degenerative brain disease that causes the brain to gradually deteriorate and lose mass over time. This disease has been found in 87 deceased NFL players. It is also common for many other athletes that play sports that include: boxing, mixed martial arts, wrestling, rugby, American football, and ice hockey.

For more information about concussions or other sports injuries, Orthopaedic Specialists is here to help. See additional blog articles we’ve written about managing a concussion for a teenagers. And for an appointment with a board certified orthopedic surgeon and sports medicine doctor in Louisville, Kentucky, call 502-212-2663 today