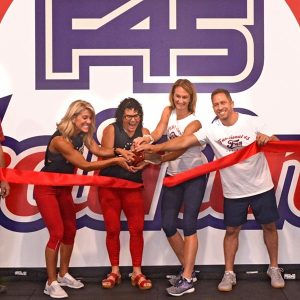 The F45 Training franchise in Louisville, Kentucky is excited to announce the grand opening of a third F45 training facility located in Crestwood, Kentucky. The newest location officially opened on Saturday, July 20th, and was commemorated with a grand opening celebration at the training facility located at 5998 Pleasant Colony Court Crestwood, Kentucky 40014. The event kicked off with two back-to-back Hollywood workout classes at 8:15 a.m. and 9:30 a.m., followed by a ribbon-cutting with the Mayor of Crestwood, Jim Kramer, at 10:45 a.m. The celebration included raffles and free giveaways from Local sponsors: HealthQuest Nutrition, ProRehab Physical Therapy, Perfectly Prepped, and Athleta.

F45 Training is the latest fitness trend to hit the Louisville area and uses a functional Bootcamp-style approach to fitness that helps members burn fat and build lean muscle. In order to bring F45 Training to Louisville, orthopedic surgeon, Dr. Stacie Grossfeld, teamed up with personal trainers Melissa Goodlett and Kim Postema to open all three locations. The first location to open was F45 Middletown which launched in April followed by F45 St. Matthews which celebrated its grand opening on July 13th. After the grand opening celebration at F45 Crestwood this Saturday, people living in Louisville now have three convenient locations available to experience the F45 Training fitness approach.

F45 originated in Australia in 2011 and has since taken the world by storm including the likes of celebrities such as Mark Wahlberg and Nicole Ritchie. The functional approach that combines high-intensity interval training, cardiovascular work, and circuit training is proven to be one of the most effective approaches to shedding body fat and building lean, strong muscle. All three F45 locations in Louisville, Kentucky follow this approach and incorporate over 3,000 exercises into a wide variety of workout routines. The global reach of F45 is staggering due to the setup of the workout routines. Every F45 training location around the world, including the three in Louisville, Kentucky, are all on the same weekly schedule. As each member participates in a Monday workout at F45 Crestwood, the same workout is being led at F45 Middletown, F45 St. Matthews, and every F45 training facility around the world.

The global, team building ideology is one reason that the F45 movement is such a large success. Another reason is the results that members who join F45 training see after attending workout sessions. Not only do the cardio classes guarantee to burn anywhere from 800 – 1,000 calories per session. In addition, the resistance-based classes focused on building muscles also deliver results quickly and efficiently. And now those living in Louisville, Kentucky who are interested in giving F45 training a try are able to do so at any of three different locations.

Each F45 training facility is outfitted with everything a member needs to get a full-body workout in 45 minutes to an hour depending on what class they attend.

Each facility in Louisville, Kentucky includes:

Meet the Team Behind F45 Crestwood

Dr. Stacie Grossfeld, an orthopedic surgeon in Louisville, Kentucky, who is also an avid tennis player and involved in a variety of fitness-related community causes saw the opportunity to bring F45 Training to Louisville and jumped. She partnered with personal trainers Melissa Goodlett and Kim Postema. Both have dedicated their lives to fitness and find immense joy in helping others achieve peak physical health.

Together, the three female entrepreneurs, along with Larry Benz, founder, and CEO of Confluence Health, and John Miller, a regional sales manager for Colgate, professional photographer, and self-proclaimed “fitness fanatic,” have successfully launched three F45 training facility locations in Louisville since April of this year and are excited to see how the city embraces the franchise. So far, F45 has been a huge success and the third Crestwood location that opened on Saturday only guarantees more accessibility for those living in the northeastern part of the city including Oldham County.

F45 Crestwood is the final F45 training facility planned for Louisville, Kentucky at this time, and is now open and accepting new memberships. For those interested in giving the functional training approach to fitness a try, a 1-week free trial is available at F45 Crestwood to celebrate their opening. If you missed the grand opening and are interested in learning more about F45 Crestwood, visit their website or schedule your first class and try F45 training for yourself.

About F45 Training in Louisville, Kentucky

International fitness chain, F45, originates in Australia and offers a wide variety of full-body workouts through a weekly schedule. Each workout is 45 minutes to an hour-long depending on the class and uses a combination of HIIT, cardiovascular training, and functional training to burn fat and build muscle. For anyone who feels like they aren’t getting what they want out of a box gym setting or are in a rut with their day-to-day workout routine, F45 is the perfect option. And now there are three F45 training facility locations in Louisville, Kentucky.

The first F45 location that opened in April of 2019 is located in Middletown. The second location that opened in early July is in St. Matthews (in the same shopping center as Trader Joe’s.) The newest location, F45 Crestwood, is located at 5998 Pleasant Colony Court, Louisville, Kentucky 40014 and is currently accepting new members. Each of the F45 locations in Louisville has its own Facebook page where members can stay up-to-date.