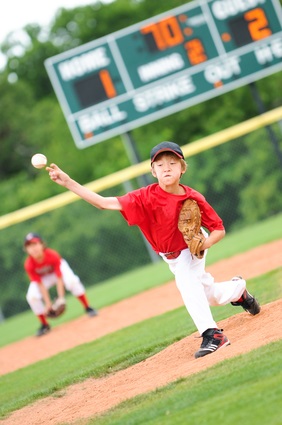 Kids who play baseball and serve as the pitcher often end up pitching a lot of balls. This can mean that their arms, shoulders, and elbows get tired, especially if they do not have much time for recovery.

Dr. Jingzhen Yang, Dr. Barton Mann, and colleagues conducted a survey with 754 youth baseball pitchers between 9 and 18 years of age to understand whether there were any relationships between injuries and pitching activities.

The researchers found that about 44% of the kids had pitched on consecutive days and just over three out of ten pitched on different teams that had seasons that overlapped. Nearly one out of five pitched more than one game in a day during the prior year.

The pitchers who had less time off had an increased risk of arm pain that was pitching-related. Certain types of pitches like curve balls also were linked to increases in arm pain. Kids who pitched when their arm was tired were also more likely to suffer from a pitching-related sports injury.

Interestingly, playing only baseball at the exclusion of other sports, playing catcher, and pitching on a traveling baseball club was not associated with arm pain or injuries. Learn more about this sports injury research.