Dr. Stacie Grossfeld, sports medicine specialist and orthopaedic surgeon in Louisville, Kentucky, interviewed Dr. Brittney Richardson regarding her experience heading a medical team at the 2014 Louisville Ironman.  Dr. Richardson is a second year medical resident with the University of Louisville Department of Family Medicine. She is currently doing her orthopedic rotation with Dr. Grossfeld. 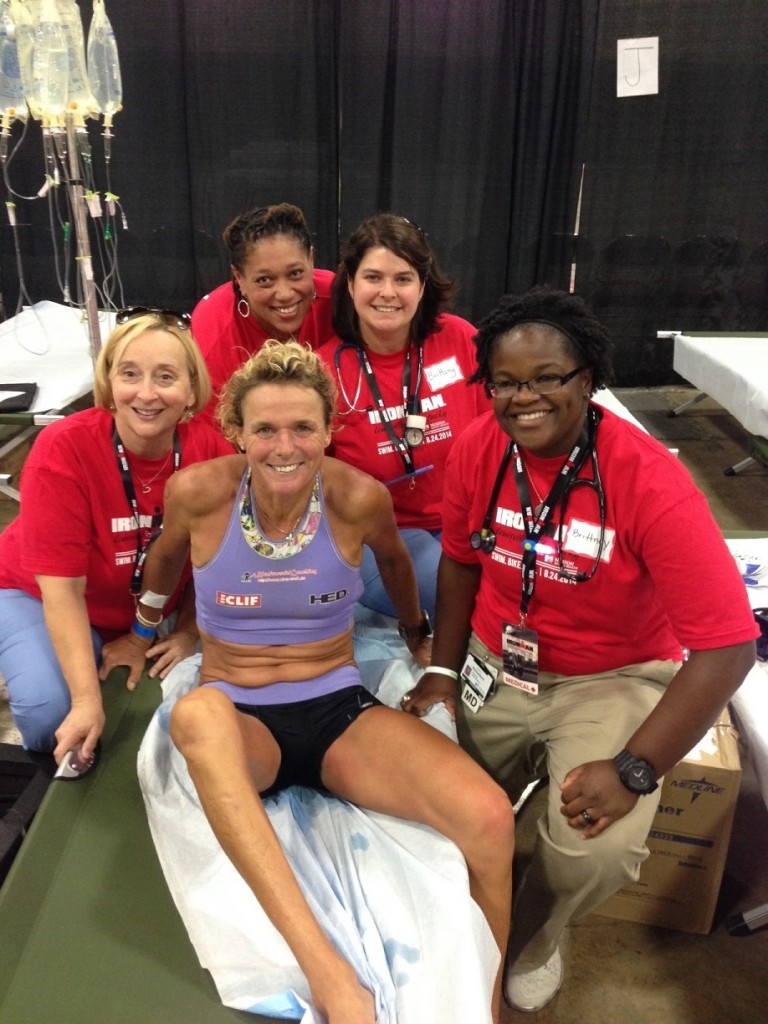 2014 Women’s Ironman Winner: Nina Kraft from Germany. Winning her third Louisville Ironman at age 46 in 9:31:19. Dr. Richardson is in the first row right with her team of nurses .

Dr. Grossfeld: “Describe what it was like at the Kentucky International Convention Center in Louisville, Kentucky, working the medical treatment area for the 2014 Ironman?”

Dr. Richardson: “It was like a war zone. There were athletes spread out over 200 plus cots in a make shift hospital located in one of the large rooms in the convention center. Many of the athletes were laying down on portable cots hooked up to I.V.s.  Athletes were being brought in by medical personnel in wheelchairs and stretchers by the nursing staff and EMS workers. Massage therapists were working on finishers with muscle cramps and spasms.

Dr. Grossfeld: “What was the general appearance of the athletes and how did they compare to other athletes you have taken care of at the end of other endurance races such as the Louisville Marathon and the Triple Crown?”

Dr. Richardson: “I have never seen athletes so sick in appearance at the end of a race. Some of them looked like they were going to die. At times it was scary. We had a full lab at the site so we could draw blood and check electrolytes to help guide in treatment.  There was also a full pharmacy present so we could administer drugs.  I had four nurses working under me in a pod of eight hospital cots. The beds were always at least 50 percent full during my shift.”

Dr. Grossfeld: “What was the scariest athlete you treated?”

Dr. Richardson : “There was a finisher that was somewhat incoherent. She was having intermittent tremors and had a hard time answering simple questions. Her pupils were dilated and my team thought she might have a seizure. One of the emergency department physicians saw her from across the room and came over to asked me if I needed any help because she looked so bad. I pumped 2 liters of fluids into her and gave her some IV Ativan for her severe muscle spasms. She then perked up. The really critical patients we sent out to one of the local hospitals for more comprehensive treatment.”

Dr. Richardson : “A ‘catcher’  is a healthcare worker that is located at the finish line and they literally catch the athletes that stagger or fall across the finish line. The athletes are completely depleted and cannot walk or even crawl. The catchers were primarily nurses that would transport the finishers into the medical area.”

Dr. Grossfeld: “What were some interesting things you learned from the athletes?”

Dr. Richardson: “It is an amazing commitment to compete in an ironman. I got to spend some time talking to athletes as I was starting their IVs and treating them. It’s not only a 9 month time commitment but a 5 hour a day training schedule. The competitors’ families completely re-work their schedules and routines to allow the athlete to train.”

Dr. Grossfeld: “When are you going to start training for your first ironman?”

Dr. Richardson:  giggles …. “Never!!! I respect those athletes but it definitely takes a special person to pay money to enter a triathlon where you work your body so hard that you literally almost die. I have honestly never wanted to run until I vomited or passed out, but to each his or her own.”