ACL injuries are responsible for pain, surgery and lots of physical therapy. Most of these injuries occur through non-contact sports or accidents sustained off of the courts or field. Researchers and physicians are working tirelessly to understand the cause of ACL injury to develop preventive programs to reduce this knee injury. Because of the current known information and a recent study that was published, athletes are learning how to lower their risk of sustaining an ACL injury.

We know at the time of ACL injuries, there are bone bruises that occur during MRI results. The bone bruises tell us that there has been contact with the femur and the tibia at the time of the ACL injury. A very interesting study published in the American Journal of Sports Medicine in October 2015, examined the position of the knee during non-contact ACL injury determined from the bone bruise location. The study was performed at Duke University with the lead author, Sophia Kim. 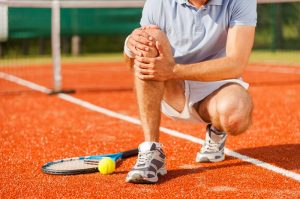 Remember that the most common way to sustain an ACL injury occurs through non-contact situations, such as the basketball player dribbling the ball down the court, stopped quickly, and tears his ACL. This is similar to the soccer player who is running down the field and she stops and pivots quickly and tears her ACL. A contact ACL injury occurs when there was actually contact from another player to the injured athlete’s knee, which is less common that the previous examples.

The researchers looked at MRI results of eight subjects with a non-contact ACL injury. They examined MRI results from a subject who suffered a non-contact ACL injury and created a 3D model of each subject’s knee and its position during the MRI position. They were able to create the position of the knee at the time of the injury based on the bone bruises and their locations.

The findings were very interesting. They found that the positioning of the knee, shin and torso is all responsible for the cause of this injury. When the flexion angle with near full extension in both the MRI position and the predicted position of injury, or when the athlete’s knee is almost completely straight, there is a valgus orientation of the knee, causing it to become somewhat knocked kneed and this increases during the ACL injury. Also, the internal tibial rotation, or when the lower leg is pointing more towards the inner part of the body than normal and the anterior tibial translation occurs which means that your shin bone shifts forward at around 22 mm at the time of the injury.

Their conclusion to the study was that the bone bruise pattern identified that the ACL injury occurred when landing on an extended knee accompanied by anterior tibial translation. This means that the shin bone shifts forward along with internal tibial rotation at 15 degrees meaning that the tibia rotates internally and that there was a valgus rotation of 5 degrees which means that the knee is somewhat in a knocked knee position at the time of the injury.

Simply put, all of these elements discussed, work in such a way that their rotation creates a knocked knee position for the individual. An ACL injury occurs because of this awkward knee position and the sudden stop, jump or pivot that produces this positioning.

This study is important because it allows researchers who are developing ACL injury prevention programs to understand when the knee is at risk and in which position the knee is at risk for sustaining an ACL injury. For athletes and other individuals, this information about the cause of ACL injury can be helpful to practice and strengthen your movements on the field or in your home.