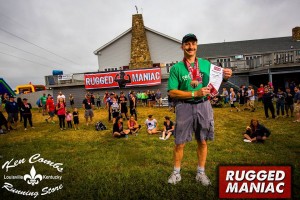 My name is Darin Johnson. Almost everyone knows me as DJ. I’ve been a long time patient of Dr. Grossfeld. I almost always seem to be doing something that lands me in her office for a visit. This last visit was unique as I found some common ground with Tisha, the Office Manager at Orthopaedic Specialists. I occasionally browse through https://louisvillebones.com and on the Orthopaedic Specialists Facebook page and had realized both Tisha and I were giving Rugged Maniac a run.

Rewind to October 2014. I was sitting (literally) at the heaviest weight I’d ever been. I was 207 lbs and tired of my pants strangling me. My ideal weight is closer to 165 lbs. Enough is enough. Tired of the tight clothes, increased bronchial spasms, high cholesterol, and blood pressure (latter two have family history), I embarked on my own fitness and food program. I began running/walking on our treadmill and logging my daily food intake.

My in-laws were staying with us for a wedding, so I had to move my gym elsewhere. I decided to purchase a one week trial membership at Anytime Fitness. It was there that I stumbled upon my newest obsession, OCR. OCR stands for Obstacle Course Racing and is the fastest growing sport in the world right now. Depending on the course, an obstacle may involve climbing up over muddy mounds or crawling through a pipe. Other courses may have you carry 50 pound objects up a trail on a mountain side and climbing a 20 foot rope. Some even have constructed rigs. These may have a combination of ropes, rings, monkey bars all in sequence. Obstacles like you may see on American Ninja Warrior.

Tackling Each Obstacle One Race at a Time

There was a sign-up on the wall at the gym for the Indianapolis Warrior Dash in June, accompanied with pictures and a finishers medal. It looked like a blast. I thought to myself, I’m due to do something stupid and get hurt for my 50th birthday. This looks perfect! I went home and jumped on the computer to do a little research. Everything I came across fueled desire to get ready for some fun. With a slogan of “Mud, Sweat, and Beer,” what’s not to like?  I now have something to train for, a goal, a reason (besides general health).

With my job I have incredible travel benefits. Knowing this, I signed up for the early bird season pass for Warrior Dash and talked my cousin into signing up for the Seattle and Portland Warrior Dash with me. I also found a co-worker that began doing OCR last year. We talked almost daily about it and he introduced me to many other races. I had no idea this sport was as big as it is. I began setting myself up with a season race schedule before I’d even run my first race. I continued training and eating right in anticipation for a full race season. I learned of the different difficulty levels, styles of each type of race. Some very easy, and some very demanding and difficult even for seasoned racers.

I had decided that I would limit myself to 5k type races for my rookie season and make it a learning year. It wasn’t until my 3rd race that I was introduced and joined a fantastic group that embodies this sport, Crazy Mudder Muckers. This group comprises over 2,000 people that range from first time racers to elite competitors. Their pooling of knowledge, motivation, and inspiration has been priceless.

It wasn’t until around my fourth race that I learned of a possible new goal within OCR, the OCRWC (Obstacle Course Racing World Championships). This event was in Oregonia, OH on October 17, 2015. A person must qualify for the race in order to be eligible to compete. What the heck. Let’s go for it. I set my sights on trying to qualify at the Spartan Sprint in Washougal, WA. I was running with my cousin that I’d talked into the Warrior Dash. We kept up a good pace until mile 4 where both of my calves completely cramped up. The final mile was not my fastest pace but I refused to give up. The final results came in and I missed qualifying by 3 minutes.

The next upcoming race was the Battlefrog in Cincinnati. Battlefrog is a race designed by former Navy Seals. It was possibly the hardest course that I’ve run to date. It was an 8k held at Kings Domain which will also be the site for this year’s world championships. I managed to place 10th in my age division, qualifying me for the world championships. What have I gotten myself into now?

One more trip out West for a Warrior Dash and then return to run my remaining races in the local vicinity. With the realization that I’ll be competing with the world’s best racers in mid October, I stepped up my training to a feverish pace in the gym.  More lifting, pull-ups, running…etc.  I didn’t hold to my own policy of moderation and over trained. I strained a tendon in my elbow. This is the reason I knew I’d be paying Dr. Grossfeld a visit.

Visiting the Facebook page for Orthopaedic Specialists I saw that Tisha was competing in the Muddy Fanatic in Paoli. Awesome! That’s my next race. It made me feel good knowing someone in Dr. Grossfeld’s office was taking part.

If you don’t know anything about OCR, know this: Everyone out on the course races primarily to have fun, exercise, and to help each other out on the course. Everyone helps everybody. Not because they have to (you don’t have to), but because they want to. Even racing for time, I’ll stop several times during a race to aid a fellow competitor. I’ve also had those same competitors stop and aid me later in the race.

I did look for Tisha but we never crossed paths. I ran in the first wave of the day and she ran in the last wave. That day I was going to run with my coworker’s son. He’s 19 years old and runs at a good clip. I thought it’d be a good challenge to try and keep up with him. As it turned out, I ran pretty well. I came in 2nd place for my age group (50 years and older).

Not too shabby for a rookie. I’ll hand it to Tisha. Those Paoli hills weren’t too kind. I had to walk several times to lower my heart rate. So if you see Tisha in the office, make sure you congratulate her on her Muddy Fanatic competition! 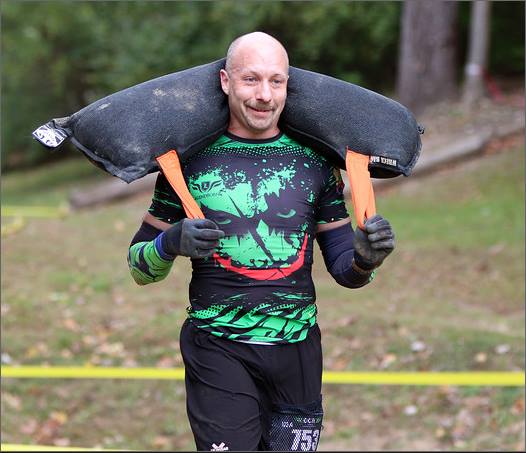