Meet our patient of the month Anne Shelburne! 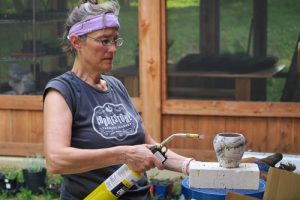 Anne and her husband, Tim, are both retired attorneys, who after meeting at the Brandeis School of Law, practiced law for 30 + years in Kentucky and North Carolina. Now the duo design, produce and sell decorative and functional art crafted from clay and wood out of their studio in Spencer County. Hobbies that once served as therapy during their careers as lawyers have now become their full time passion. Anne is a ceramicist, and Tim a woodworker. You can follow their work on Instagram at the handle @ridgeworksky or purchase it at the Edenside Gallery on Bardstown Road.

Anne fondly refers to her female figurines (pictured below) as “Queens.” She strives to depict the beauty, strength and resilience of women in each figurine. 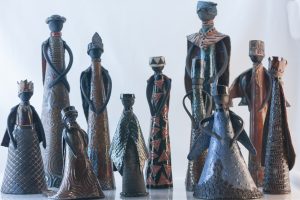 Recently, while Anne was glazing one of her favorite Queens, it fell and the arm broke off at the right shoulder. Rather than discarding the broken Queen, Anne fired her and was pleased with the results, although she only has one arm. As fate would have it, just a few weeks later, Anne would suffer from a similar injury at the beach (fortunately she would get to keep her arm).

During a trip to North Carolina for an art show, Anne lost her balance on the beach while photographing gulls, landing on her right shoulder. Though she initially thought she had dislocated it, Dr. Grossfeld would later diagnose it as a displaced acromion fracture, an extremely unusual injury.

Luckily, with the right preventative measures, exercises and physical therapy, Anne has been able to avoid surgery and is recovering well. She’s even turned to her art as part of the healing process, beginning with a super imposed image of her one armed Queen onto the X-ray of her now healing fracture. 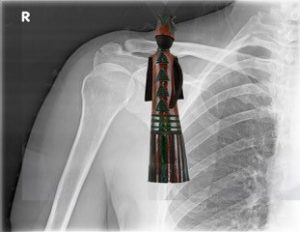 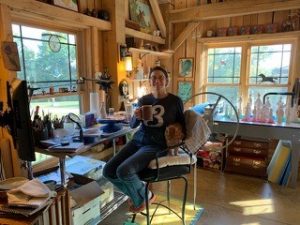