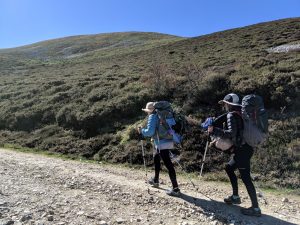 At 68, Judy enjoys the outdoors and being physically active. Originally from New Jersey, Judy moved to Louisville in 1980. She is a mom of two as well as an investment adviser.

In May of 2019, Judy traveled with her daughter to hike the Camino de Santiago in Spain (also known as the Santiago de Compostela) a medieval pilgrimage that takes anywhere from 5-6 weeks to complete. The pilgrimage ultimately leads to the shrine of the apostle Saint James the Great in Spain.

Though her first reaction to the idea was to tell her daughter “you’re crazy,” Judy became inspired after watching the movie “The Way.” In the movie, actor Martin Sheen plays an American father who travels to France to retrieve the body of his estranged son (who died while attempting the pilgrimage.) Sheen ends up making the journey himself in an effort to understand.

“After watching the film, I said to myself, ‘okay I’m doing this.'” Judy trained for 6 months to build her legs and upper body. She needed to be strong enough to be able to carry her backpack for the duration of their trip. The mother-daughter duo began their trek in France. They walked 5 days, at 15 miles a day, on a trail marked by yellow arrows and clamshells. 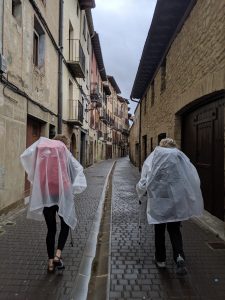 However, during their travels Judy aggravated her back one day when she went to hoist up her backpack. After 6 months of medicine and worrying that she had torn her rotator cuff, she was referred to Dr. Grossfeld by her doctor for a cortisone shot.

Judy is happy to report that she is feeling much better and was actually able to swim laps for the first time very recently. “The thought of not being able to do things would be devastating.”

In May of 2020, Judy and her daughter plan to pick up where they left off. Although it was very challenging, I cannot recommend this hike enough. My favorite thing about the trip was the people that we met along the way and just the breathtaking scenery of the towns, country side and mountains that surrounded us.”