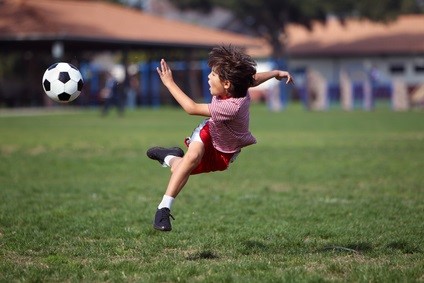 An excellent article comparing pediatric sports injuries to adolescence sports injuries was published in American Journal of Sports Medicine August 2013. Authors Dr. Andrea Stracciolini and Dr. Lyle Micheli et al. from Boston’s Children’s Hospital looked at two groups of athletes based on age: 5-12 years olds and 13-17 year olds. Over 2,100 children were enrolled in the study. Their results are very interesting. The two groups had different sports injuries in terms of types and severity.

Osteochondritis dissecans also known as OCD is believed to be caused from repetitive micro-trauma resulting in death of the cartilage and some time the bone in the area of the injury.

Spine injuries were not as common in this younger age group as compared to the older children. What was interesting in this age group was the higher percentage of spondylolysis. This primarily occurred in the female patients (76%). Spondylolysis occurs from either a growth plate fracture in the spine or from a repetitive injury that does not let one or more of the growth plates in the spine to close.

Dr. Darrow et al. published a study in the American Journal of Sports Medicine in 2009 and found that severe pediatric injuries (loss of greater than 21 days of sports participation) occurred most commonly for football players, followed by wrestling, girls’ basketball, and girls’ soccer.

The three most common diagnoses in this group including the following:

What was concerning is that one in four of the above mentioned severe injuries required surgery with over half of them being knee surgeries.