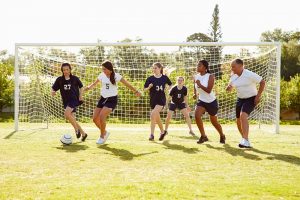 There are over 250,000 sports related concussions per year among student athletes. However, the female athlete has been shown to sustain 50% more concussions than the male athlete. The differences are most commonly seen in sports such as basketball, soccer, and volleyball, as well as lacrosse.

Additionally, some studies have documented that female athletes have more severe concussions then their male counterparts. This is often coupled with worse symptoms, including greater cognitive functional deficits as well as a longer recovery period.

Why do females have a higher risk of sustaining a concussion? There have been many medical theories proposed to answer that question…

Dr. Grossfeld has over 25 years of experience in orthopedic medicine and is a double board-certified orthopedic surgeon in sports medicine. To get more information about concussions and other sports related injuries, contact Dr. Stacie Grossfeld today by calling 502-212-2663 to make an appointment. Orthopaedic Specialists has two convenient locations in Louisville, KY and is currently accepting new patients.