The American Academy of Orthopedic Surgeons published an article this June where they interviewed four prominent orthopedic surgeons who are also team physicians for pro sport teams. Dr. James Andrews, Dr. Brian Cole, Dr. Anthony Miniaci, and Dr. Frederick Azar. The orthopaedic surgeons talked about what it takes to be a team physician. This includes some of the trials and tribulations that come with being a team physician for a pro-team or high school and college teams.

Being a Team Physician — “It Takes a Team”

Dr. Cole explained the first role of the being a team physician is always remembering that he/she is part of a larger medical team. He quoted author and humorist Mark Twain, saying that: “really great people make you feel that you, too, can become really great.” He stated that there is a large group of people that are needed to take care of a sport team. He used the example of a hub and spoke diagram. The athletes comprise the hooks and the team members are the spokes. The team members involved are the physicians, the athletic trainer, the nutritionist, the sport psychologist, and any other providers that are helping take care of the athletes. Dr. Cole stated that he followed the SCOR which emphasized the importance of knowing when to Support, Collaborate, Oversee, and Refer the athletes. 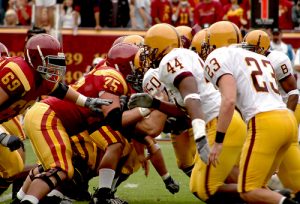 Dr. Jimmy Andrews stated that the athletic trainer is the “glue that holds it all together, and does not forget about the emergency medical technicians.”

Dr. Cole also talked about the importance of the “six Cs of being a team doctor.” He discussed the six Cs as showing Compassion, Communication, Confidence, Charting, Coverage and Contract. He noted that compassion means letting the athlete know you care and you are available 24-7. Communication encompasses a do it yesterday mentality. He continues with a clear instruction about the treatment plan and information about the risk of condition and sports participation. Confidence means a physician must stay current. Charting means documenting all encounters no matter when they occur. Coverage involves clarifying malpractice insurance and asset protection, and the contract means filling out the details of services provided, insurance coverage, volunteered or paid status and the final say about return to play. The physicians all noted that you must remember these student athletes or pro-athletes are patients first, athletes second, and that there is life after sports.

Dr. Cole noted one of the greatest challenges a team physician faces especially at the professional 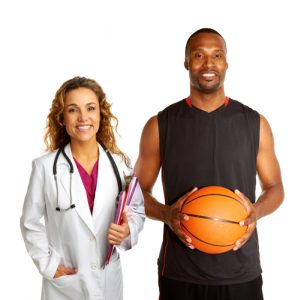 level, is earning and cementing the trust of the athlete. “Loyalty is earned in this field and can be very temperamental,” Dr. Cole said. He noted that in the national football league, it was reported recently that a significant percentage players distrusted their team physician.

Another part of the team physician’s job that can bring headaches is dealing with the media. Dr. Cole stated this can be a challenging area. “My general approach is that I do not talk to them. The only time I will talk is when an organization ask me to address the press, and then it is a talking point.” You never want to be called off guard. The athletes have privacy law that protects them such as HIPAA and ethical concerns abound. Dr. Cole stated that he always respect the player first and the organization first.

Dr. Andrews discussed some of the challenges specific to sports at the amateur or professional level. He also identified differences among the major sports. In college, he explained one issue looms the largest — pre-participation clearance. Dr. Andrews stated that it is pretty well accepted in the sports medicine world that team physicians have the final word on disqualification for participation though he/she can use consultants. He also stated that some pre-participation issues might not be so self-evident. For example, should walk-on athletes be able to participate with a medical problem that could be compounded? He believes that they should not allow walk-on athletes to take much risk especially with preexisting problems.

The team physician also should have the last word on who decides to return to play in the heat of battle or from week to week. Dr. Andrews noted at times there can be conflicting goals, for example, let us say if a star running back is hurt with a meniscal tear and has a bucket handle tear. Bucket handle tears can typically be repaired; however, if you repair a bucket handle tear, the athlete is out for about three months. If the bucket handle tear is resected, they could return to play within seven to 10 days. At that point you would have to decide what is best for the long whole and career versus what gets the player back faster.

Dr. Andrews also stated that the coaches’ opinion sometimes goes. He noted that you are not doing the team any good by playing a player out there who is hurt. Coaches do not realize that their second team player is better than their hurt first strength player.  He stated the problem also arises in preseason when the player wants to avoid minicamp, optional team activities, and preseason workouts and games for which the players are barely paid. Dr. Andrews stated this is why you see so many high level NFL players pull their hamstrings in preseason. There was no great solution and the team physician is really in a top spot, he noted.

Dr. Andrews also noted that in major league baseball with an extensive system of minor league issues related to status, a player sent to the minors may claim an injury occurring while he was in the majors. This would keep him at a major league pay scale. Then on the flipside, you have a young player that may hide injuries in hope of trying to make the major league team or stay on it.

There was also the question when a chronic injury occurs that may be compounded by frequenting training of players in free agents. Many injuries occur from overuse, but the question is which team is responsible for that player’s treatment of that injury. He also noted the National Basketball Association where ironclad collective bargaining agreements and high dollar guarantee contracts prevail, the chance may be that a player has no incentive to get back to play quickly. He stated it is difficult dealing with these various issues, and the team physician may get caught in the middle in the art of keeping both the player and the team happy. 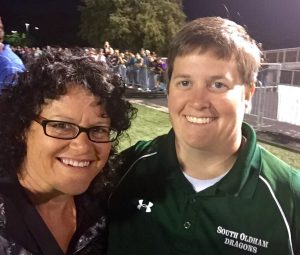 for a college or professional team. While this job may seem like a dream for some, it does not come without responsibility and some hiccups.

As an experienced team physician for area college and high school sports teams, Dr. Stacie Grossfeld understands the importance of her role as team physician and sports medicine doctor to these organizations. She proud to serve these athletes across Kentucky. It is her obligation to keep these young athletes safe and to effectively treat sports injuries when they do arise.

If you have any questions about Dr. Grossfeld and her work as a team physician or if you would like to schedule an appointment with Dr. Grossfeld, call 502-212-2663.