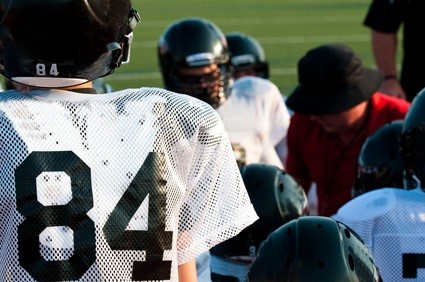 An elite athlete who is a pro football player has a career in the NFL on average for 3.6 years. Pro football players tend to sustain football injuries at much younger ages than the general population.

Two interesting studies were published in the American Journal of Sports Medicine in 2013 looking specifically NFL football injuries. The first article was published in August and it reviewed quadriceps tendon injury. The second article, published in September, looked at operative and non operative treatment of cervical disc herniation.

Predisposing factors for a quad tendon rupture in the general population are:

Diseases such as: diabetes, renal failure, rheumatoid arthritis, and infection can predispose patients to rupture of the quadriceps.

The age at which the rupture occurred was much younger in the NFL players compared to the general population. Dr. Boublik et al. from the Steadman Hawkins Clinic in Vail, Colorado, found that the average age of quadriceps tendon rupture occurred at 27 years. The mechanism of injury occurred primarily as an eccentric overload of the extensor mechanism (77%) in the players. Treatment involved surgical reattachment of the tendon.

In this study they found that the football injuries were primarily season ending.  It was also career ending for about half of the players.

In summary a quadriceps tendon rupture in an NFL player results in surgery, loss of at least one season of play, and ends 50% of the players NFL careers .

Linebackers, lineman and defensive backs were the most common position affected (81%). Cervical disc herniations account for an average of 85 days of lost play per injury, which was the third longest period of disability per spinal injury after thoracic disc herniations and cervical spine fractures.

Treatment ranged from non-operative methods to surgery. Three players underwent a one level anterior cervical diskectomy and fusion. A diskectomy is a surgery that removes some or all of the cushion that protects your spinal column. They had evidence of spinal cord compression with signal change on MRI. Only one of the three players returned back to playing football.

Follow the orthopedic and sports medicine blog from Orthopaedic Specialists to stay up on all the latest treatments for sports injuries, sports injury prevention, orthopedic surgery, and more.