When many of us are still at home sound asleep, Andy Gunkler has already completed his first workout of the day.

Most days Gunkler wakes up at 4:45 a.m. and heads to the YMCA Norton Commons a short while later for spin classes, weight lifting and swimming. When not at the YMCA, you might see him around town taking long walks with his dogs, or riding his bicycle with the Louisville Bike Club.

Describing himself as a “lifelong athlete,” Gunkler aims to take a minimum of 10,000 steps a day, and over the years he’s participated in nearly every sport you can imagine including: football, basketball, skiing, tennis, golf, racquetball, swimming, kayaking and cycling. And he’s run at least 10 marathons. 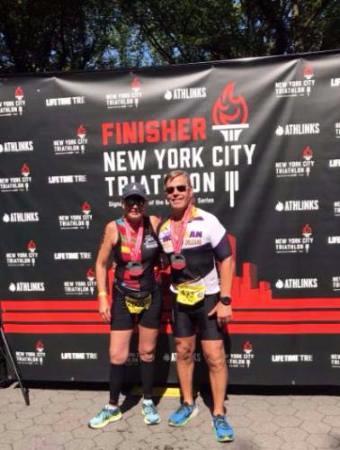 After enjoying many injury-free years as an athlete, Gunkler experienced two major injuries in less than a year. The first, a painful lower back injury, was likely the result of long term wear and tear. Gunkler explains that he was in very serious pain, and after going to his regular doctor, he decided to consult with another regular from his early morning spin classes — Louisville orthopedic and sports medicine physician Dr. Stacie Grossfeld. Recognizing Gunkler’s symptoms, Dr. Grossfeld advised Gunkler on next steps and before long he was on the operating table undergoing surgery.

Fortunately, this determined 65-year-old bounced back with lightning speed, walking 5 miles just 48 hours after surgery. And then about 6 months later Gunkler took a serious fall while alpine skiing, crashing into a tree, and breaking some bones in his shoulder. “I don’t even remember falling,” he laughs, “and now I don’t have any pain, but it did impact the mobility in one of my arms.” Gunkler stretches both arms up to demonstrate and there is about a foot difference in his ability to extend the arm on his injured side.

Despite the setbacks, Gunkler doesn’t seem to be slowing down. Most recently he and his wife
(and favorite training partner) Alyce Weixler completed the New York Olympic Triathlon which
included a 1500 meter swim, a 25 mile bike ride and a 10k run. Describing the experience,
Gunkler lights up talking about swimming in the Hudson. “In most races, the older people start
last, but in this one, they started first!” Gunkler explains enthusiastically, “The current really
helped improve my normal swim time in the Hudson,” he goes on to explain, “and the running
portion of the race was around Central Park which was wonderful!”

Gunkler moved to Louisville about 5 years ago from New Orleans where he completed two half-Ironmans and he has his own business working in franchise consulting. Growing up in Fort Wayne, Indiana, Gunkler has many happy memories of the time he spent playing basketball with his dad. In high school he participated in football, basketball, track and field, and tennis, and as a student at Wobash College in Crawfordsville Indiana, he played both football and hockey. “I came from an active family,” Gunkler explains, “My dad was one of the star basketball players for his high school team, and
my mom had a stint as a New York City model. She ate a healthy diet and walked up to 25 miles
a day, with 10 miles completed by 7 a.m.”

When asked about what keeps him motivated, Gunkler explains that he doesn’t need any
special books, training pros, music, or apps. He says that it’s just a mental thing … “You just kick
yourself in the butt and get going,” he states matter-of-factly… “A lot of us know what to do,
you just have to be disciplined enough to do it … And it helps if you have a little bit of attitude,”
Gunkler says smiling.

Reflecting on it more, Gunkler does emphasize the importance of having friends that are also
physically active. He talks fondly of his bicycle group that often shares a meal and good
conversations after their Tuesday night rides. He also enjoys getting involved in organizations
focused on making Louisville a better place to live. This includes serving on the Board of
Directors at the Norton Commons YMCA.

And he also likes supporting organizations that focus on helping out kids including the Brendon
P. Bachelor Foundation. This new organization recently launched Brendon’s Duffels of Hope, a
program designed to offer comfort to children who are in the foster system due in large part to
the drug epidemic in Kentucky.

People like Gunkler are a huge inspiration and an asset to our community. We’re very excited to
be able to consider him a part of the Orthopaedic Specialists family and we look forward to
seeing what challenges and goals he successfully accomplishes next.