Meet this month’s patient of the month Ian Lawler! 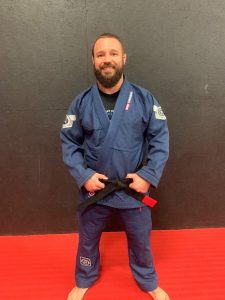 Ian is originally from California and moved to Kentucky when he was 10 years old. He joined the military when he was 19 and in 2012 had to undergo quite a few surgeries. Since then, Ian has worked with Dr. Grossfeld to help treat his knee, shoulder, and soon his hip. “It’s awesome that she works so well with veterans and always seems eager to help. I’m really appreciative of her always being willing to answer questions.”

Ian owns and operates Somerset Martial Arts, an after school, summer camp, fitness and martial arts program in Somerset, Kentucky. In addition to coaching martial arts, Ian is currently preparing for the 10th Annual Refuge Strongman Classic on August 1st. Though he has never trained for the strong man competition before, it was the only fitness contest he could find between now and the CrossFit Open in October. Unfortunately due to COVID-19 all the competitions around have been cancelled. “I honestly don’t care how I perform, as Strongman is not my sport, but I am trying to be as prepared as possible.”

Ian is looking forward to participating in the CrossFit open in October for the 2021 season and is anticipated to be in the top 2% of the world this year. He is hoping to be the fittest in Kentucky. Barring any injury, Ian’s goal is to make it to the games in the summer of 2022 where he’ll be 32 years old and one of the oldest (if not the oldest) CrossFit Games rookie to date.

Ian started competing in fitness after being a professional MMA fighter.

“I still love fighting but the preparation for fights took so much away from my family while giving so little that I couldn’t justify it anymore. Fitness is something that helped me prepare for fights and I had always watched the CrossFit games. When I realized I still had the fire to compete, I decided CrossFit was it! In CrossFit it doesn’t matter who your manager is, what promoters you know, how many tickets can you sell, how big your social media following is, or what team you’re with. If you can make the time hacks, if you can lift the barbell, if you can beat the person next you, then no one gets to over look you. It doesn’t matter how marketable you are. In CrossFit you either can or cannot, which for me was much simpler and now I love it!!!”
When asked what keeps him motivated, Arthur responded, “I want to stand in the sunlight competing against the fittest on the planet, then look at my wife and my children, smile and say I made it against a lot of obstacles, against a lot of doubters, that my hard work and faith paid off! And of course remind them that they can achieve anything they put their everything into.”
When he’s not trying to become one of the fittest people on the planet, he enjoys spending time with his beautiful wife and children, training, and reading.