Those who have met Lauren Russell would describe her as the epitome of both dietary and physical health with the physique of a Spartan statue. The 29 year old mom of four, lifts, is active within the CrossFit community, and is also a personal trainer; all of which she has been doing for over 10 years now. 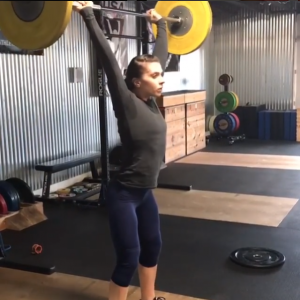 Passionate about helping others achieve their fitness goals, she both created and teaches a Cardio Fit class at the YMCA in Norton Commons, where she met Dr. Stacie Grossfeld. The class which meets 6 times a week, is a mix of a high intensity workout with lifting incorporated. Lauren who has been teaching this class for four years now, prides herself in her student’s loyalty. “No one comes to class if there’s a sub. We’re like our own little family and usually arrive 30 minutes before class just to talk.”

Despite her friendly and personable demeanor, Lauren doesn’t mess around when it comes to her class or her clients. “If someone comes in whining that this is their first time, or to go easy on them, I just say, ‘sit down! Listen! Let’s get to it!’”

Lauren’s no nonsense attitude is equally applied to her Olympic lifting competitions. Her best snatch (the raising of a weight from the floor to above the head in one quick movement) is a 63, and her best clean and jerk (the raising of a weight over the head and then to shoulder level) is a 91.She is currently fully invested in going to nationals for weightlifting and is taking the summer off to train herself before returning to competition. Though Lauren trains under her coach Benjamin Carter, who runs the CrossFit gym Bluegrass Barbell, she keeps close track of her dietary and physical health at home as well. 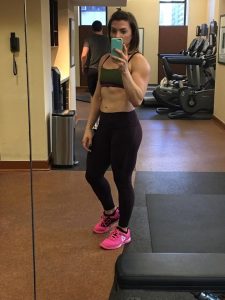 A Day in the Life

A creature of habit and schedule, she even makes it a point to take advantage of hotel gyms while traveling with her husband for work. Rest days, she says, make her tired. “It’s as if I need the workout to keep my energy up.” When in town, she wakes up every morning around 5 am to drink her coffee, and then work out with her husband for an hour or two. The pair converted their garage into a full scale gym to better utilize the early morning hours as their bonding time.

Throughout the day, Lauren uses the RP Strength program online to track her fats, carbs, and proteins down to every detail and recommends the app for everyone from Olympic athletes to mom’s just like herself. Though she eats the same thing every day, with very few exceptions, she loves the type of training she does and isn’t bothered by a routine diet. “I actually miss it when I don’t eat my usual meal.” 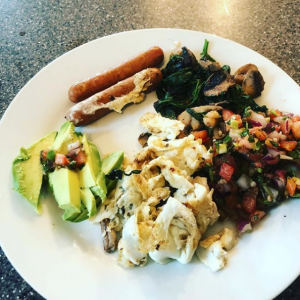 Daily meals include a protein and carb combo as she works out in the morning, and a protein pancake with bananas afterwards. For lunch, its egg whites, Brussel sprouts, a sweet potato, 1 teaspoon of peanut butter, 2 pieces of bread, and a 2-5oz turkey breast. Dinner consists of spaghetti squash, homemade pasta sauce, and handmade sausage from Whole Foods. Her occasional indulgence (usually on date night) is red wine; though she often rewards herself with a black, cold brew coffee from Starbucks.

A tattoo in script that runs down Lauren’s thigh reads, “Strong and Beautiful”; a gift for herself after completing her very first pull up. It’s these exact words that exemplify why she lifts. “All women should do something that makes them feel strong,” she says, “I work out because of the way it makes me feel: strong and powerful. There’s a major girl power element to it.” Instead of tearing each other down, she advocates for women to be more supportive of each other in their strength and in general. This is why when a teammate of hers beats her in competition, she doesn’t let her athleticism over power her; instead congratulating them and high-fiving them in support. 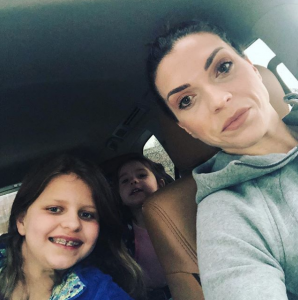 On top of her rigorous athletic career and training program, Lauren is a busy mom of four and running for Vice President of the Parent Teacher Association at one of her daughter’s schools. Admittedly, she doesn’t like to slow down, and enjoys staying busy with her kids in tow.

Getting the Kids Involved

Lauren encourages younger generations to stay active as well. “You’re never too young to get started. Just make sure you get a professional who knows how to train your specific age to avoid injury.” She supports her daughters Ezra (age 9) and Lucy (age 3) who also share her love of nutritional health and athleticism. In fact, Ezra just finished competing in her 2nd weight lifting competition, and Lucy lifts a small 1.5-2lb weight. While they also watch what they eat, Lauren lets her kids be kids; never making them stand out of a pizza party, and even baking cupcakes for class parties. And when she does indulge in a treat, she makes sure to do so in front of them so they know it’s normal. 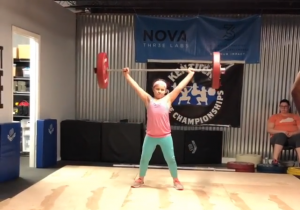 Lauren’s advice to others wanting to be more active is to just do it! “You don’t have to be a certain size, shape, or even in a specific place in your life to start. Small steps make a big difference. First find a workout you enjoy so you will actually stick with it. And when it comes to your diet, don’t try cutting everything out at once, but rather get rid of one bad habit at a time.”