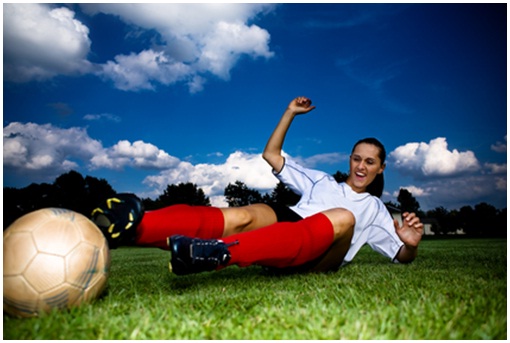 Injuries to the anterior cruciate ligament or ACL injury risk is a common sports injury for many athletes, especially in certain sports. Soccer is a sport that has a higher than average ACL injury risk.

Research led by Dr. Brophy and colleagues (2014) at Washington University Orthopedics examines the mechanisms of ACL injury risk for soccer players.  In this sports medicine study, videos of ACL injuries for about 55 male and female soccer players were analyzed to understand the injuries affecting the anterior cruciate ligament.

About three fourths of the injuries happened when the other soccer team had the ball and the athlete suffering from the injury was playing a defense role.

The most common soccer action leading to an ACL injury was tackling and to a lesser extent, cutting. Most ACL injuries happened from some type of contact.

Researchers concluded that playing a defending role put soccer players at greater ACL injury risk. This was especially true if a player was tackling an opponent to try to get the ball. Learn more info on this interesting sports medicine research.