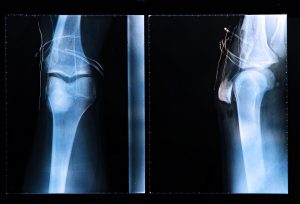 A torn Anterior Cruciate Ligament, more commonly known as an ACL, can be a difficult injury for a high school or college athlete to sustain. Unfortunately, they are also the most common injuries sustained by athletes. Football, soccer, hockey, and basketball players are highly likely to sustain an ACL injury over their athletic career and ACL injuries are becoming more common thanks to a variety of factors including:

Once an ACL injury occurs, there is only one solution for recovery and that is to undergo an ACL reconstruction. In an article published in the American Journal of Sports Medicine in March of 2017, Dr. Toanen and his team of researchers found that regardless of age, ACL reconstruction is the best approach to repairing a torn ACL. Patients who opted for reconstructive surgery were able to return to the same activity level they were at prior to injury.  Additionally, patients were able to twist, turn, jump, and run as well as they were previously.

Multiple studies on ACL Reconstruction have been conducted. While the data varies study-to-study, the findings are similar.

In 2009, the American Journal of Sports Medicine published a report by Dr. Shelbourne et. al. that found a 17% risk of an ACL injury recurring among patients under the age of 18. This statistic applied to both the surgical side and the contralateral side of the ACL. Dr. Shelbourne also found that as the patient aged, the risk of another ACL injury decreased substantially. Between the age of 19 and 25, chances of re-injury dropped to 7%. After the age of 25, patients were at a 4% risk of re-injuring the previously torn ACL.

Dr. Kamath et. al. found an even higher rate of re-injury in a study published in the American Journal of Sports Medicine in 2014. He concluded that 32% of athletes that had torn their ACLs in high school and were playing Division 1 sports in college were at risk of re-injuring the weakened knee or injuring the adverse knee.

A study done by a Dr. Webster that was published in the American Journal of Sports Medicine the same year also reported on the topic of re-injury rates in younger patients undergoing ACL reconstruction. Dr. Webster found a subsequent ACL injury rate of 29% in athletes who were less than 20 at the time of their surgery.

Another study from the Swedish ACL Registry showed that adolescent patients ages 13 – 19 had a 3 times greater risk of contralateral ACL injury after undergoing ACL reconstruction. Additionally, The Kaiser Permanente ACL Registry has shown a 32% revision rate in patients undergoing ACL surgery that were under the age of 21. Furthermore, the revision rate decreased 4% each year the patient grew in age.

And finally, Dr. Kate Webster, who is of no relation to the Dr. Webster previously mentioned, conducted an extensive study on ACL re-injury fates and made some interesting findings. Dr. Kate Webster found that the highest re-rupture rate after undergoing ACL reconstruction was males who were under the age of 18. Said re-rupture rate was recorded at 28.3% which means that over a quarter of males who have injured their ACLs prior to turning 18 will re-injure the same knee. Webster also found that 74% of recurrent ACL injuries which have occurred after undergoing reconstruction occur within 2 years of surgery and that 18% of patients reported contralateral ACL injuries within 4 years of their initial reconstructions.

Multiple medical doctors have conducted studies surrounding ACL re-injury rates in a wide variety of situations. Overall, the trend proves that once an athlete under the age of 18 suffers a tear to an ACL, their chances of re-injuring that same ligament or injuring the contralateral ligament are extremely high. This is especially true in athletes who continue to pursue their sports careers into college after the initial injury.

If you are an athlete in middle school, high school, or college who has suffered a tear to an ACL, undergone reconstruction, and are still playing sports, contact Dr. Stacie Grossfeld today.

Dr. Grossfeld is a double-board certified orthopedic surgeon with a focus in sports medicine and has extensive experience with torn ACL injuries. Dr. Grossfeld can help determine a safe approach to strengthening the reconstructed ACL and help establish a preventative exercise routine. Contact Dr. Grossfeld at Orthopaedic Specialists today by clicking here or calling 502-212-2663.